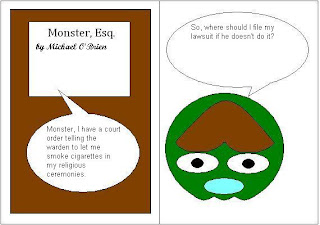 Wilkins-Jones v. Alameda is a case under Section II of the Americans with Disabilities Act (ADA), the California Disabled Persons Act (CDPA) and the Unruh Civil Rights Act.  Ms. Jones suffers from systematic lupus and rheumatoid arthritis.  On April 13, 2007, a California Highway Patrol Officer pulled over Ms. Jones for speeding and arrested her for failing to have a valid license. He then took her to the Santa Rita  Jail where she was booked, seen by a nurse and transported to and from the courthouse several times.  She claims that she did not receive a wheelchair, timely access to her medicine and that the facilities were not barrier free.  Ms. Jones never claimed to need a wheelchair, but her hands are shriveled and she walks very slowly.  Judge Marilyn Hall Patel found that this was sufficient for a claim under CDPA but not ADA because the former can be satisfied with a showing of negligence but the later requires deliberate indifference.

This is controversial in California.  Compare C.B. v. Sonora School District (E.D. Cal. 2010) (Wagner, J.) (" Consequently, to the extent that the Complaint may be construed to allege a violation of the Unruh Civil Rights Act or the Disabled Persons Act based on a violation of the ADA, because the Complaint alleges a violation of Title II of the ADA, Plaintiff must plead and prove intentional discrimination in order to state a claim for relief in the First Cause of Action.") with Lonberg v. City of Riverside (C.D. Cal. 2004) (Timlin, J.) ("proof of discriminatory intent need not be proven to establish a violation of [CDCA].") reversed on other grounds (9th Cir. 2009).


She granted in part and denied in part the motion for summary judgment.

Taylor v. Grannis is an action by a prisoner pro se under the Religious Land Use and Institutionalized Persona Act (RLUIPA).  Mr. Taylor argues that upon entrance into Pelican Bay State Prison guards refused to give him tobacco products needed for his "Wheel of Love" religious ceremony.  This is the second lawsuit Mr. Taylor filed in this regard.  Interestingly, he was victorious in the previous one:


The Department is ordered to make tobacco available for Petitioner’s use during the Wheel of Love ceremony. The Court would expect that the amounts and frequency of the use would be consistent with that used by other inmates for religious purposes. Nothing in this order should be interpreted to require the Department to purchase the tobacco at its expense nor to allow the petitioner to keep the tobacco in his cell.

Apparently, this never happened, rather than file a motion to show cause in Del Norte County Superior Court, Mr. Taylor filed this federal lawsuit which Judge Marilyn Hall Patel dismissed for lack of subject matter jurisdiction.

National Union Fire Insurance v. Resource Development Systems is a large common law fraud action.  National Union is a subrogee of Waste Management, Inc,. which owns the Kirby County Landfill (KCL).  National Union alleges that between December 2005 and May 2008, landfill employees took kickbacks in order to allow trucks from the defendant trucking companies to dispose of waste at KCL without proper processing or payments to Waste Management.  National Union approaches the present case as a civil conspiracy, as Judge Jeremy Fogel explains,

Here, Judge Fogel found that National Union failed to meet the pleading standard of Rule 9(b) by failing to describe each defendant's role in the conspiracy other than generally alleging their involvement.  He dismissed the complaint with leave to amend.
Posted by Unknown at 1:48 AM