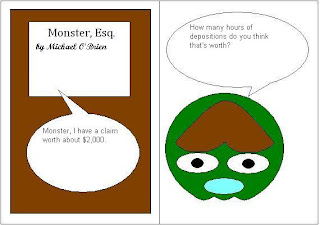 One of the largest law firm stories of 2008 was the Heller Ehrman dissolution.  Judge Dennis Montali has been presiding over the bankruptcy proceedings for the past two years and recently released a pair of memorandum opinions that discuss priority of claims in that case.

In the first matter, Kelly Seaburg and Havila Unrein claim they were not paid a $10,000 stipend they were promised for moving their start date as associate attorneys back three months. Ms. Seaburg and Ms. Unrein claim that they are entitled to statutory priority under 11 U.S.C. § 503(a)(4) because the stipends were, "wages, salaries or commissions...."  Judge Montali explained:


The foregoing arrangement had the effect of keeping Claimant on a form not unlike a retainer, viz., remain available from October to January and be paid $10,000 in three monthly installments before you show up at the office. Leave us and go elsewhere on a permanent basis, and don’t get paid. In the overall context of the history of Claimant’s affiliation with Debtor, Debtor’s prior treatment of their remuneration, and the context of the deferral letter, coupled with the policy arguments well-briefed by Claimants, satisfied the court that their claims are entitled to priority.

In the second matter, Robert Borton claims the debtor owes him $21,666.66, of which $10,833.33 is asserted as a priority claim under 11 U.S.C. § 507(a)(4) because he did not receive adequate notice of termination or severance as required by his retirement agreement.  Both parties also moved for summary judgment on whether the denial of severance was wilfull.  Judge Montali explained that wilfullness is an issue of fact for a later hearing, but questioned whether a hearing made any sense in this case:


Because a claim for just over $10,000 will probably receive between 20% and 60% on the dollar in this case, the parties may find it sensible and practical to compromise this remaining dispute between them rather than litigate over so small an amount.