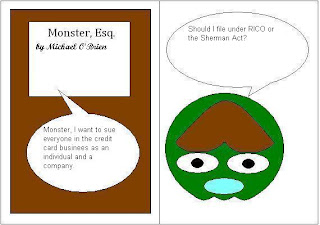 Just Film, Inc. v. Merchant Services, Inc. is a massive credit card services and equipment fraud action which has more characters than the Book of the Thousand Nights and a Night. Here is the playbill based on court documents:

Plot – According to court documents, companies trick merchants into accepting and signing agreementsthat leads them to pay more then they need to for credit card services and equipment that they do not need. The companies then added pages with mandatory arbitration clauses and forged signatures to modify these agreements. To collect from lessees who default on their payments the lessors hired some lawyers to file suit in New York to obtain default judgments to extort money from the merchants. When merchants did pay, the lessors added extra fees such as personal property taxes where no such tax existed. The merchants have filed suit stating this entire scheme is a racketeer influenced corrupt organization (RICO).

Act I Scene I: Defendants' Motion to Dismiss the First Amended Complaint

Regarding the enterprise requirement:


According to their complaint, Defendants associated for the common purpose of “executing a scheme to defraud class members through a pattern of racketeering consisting of distinct acts of mail fraud, wire fraud, and money laundering.”

That is sufficient to show an ongoing organization. However, the categorical pleading left much to be desired in the conduct requirement:

Here, Ms. Walshe is described as a mere participant in the scheme and cannot incur liability under RICO. Similarly, the Plaintiffs do not allege that MBF Merchant Capital had any part in directing the enterprise’s activities. However, Mr. Healy, as president of MBF Merchant Capital had the authority “to unlawfully deduct monies from the accounts of Plaintiffs [and] to enforce unlawful contract provisions….” That was sufficient to plead conduct against him.

There is no racketeering activity plead at this moment and the only racketeering activity alleged is mail fraud and wire fraud. The Merchant Services Companies, Mr. Moore and Ms. Roy do not contest the allegations against them in this regard, however, Mr. Parisi, Mr. Jurczyk and Mr. Madura do. As Judge Wilken explained:


[Plaintiffs] allege that Parisi, Jurczyk and Madura “direct and control the Merchant Services Defendants and worked in concert to cause the Merchant Services Defendants to engage in the conduct described in this complaint.” Am. Compl. ¶ 20. This general allegation is not sufficient. Thus, Plaintiffs’ RICO claims against Parisi, Jurczyk and Madura fail.

The plaintiffs allegations that Ms. Walshe made misrepresentations to them in making sales contracts is a sufficient racketeering activity, but it is insufficient to show that she had some control of the situation.
Similarly, with regard to the leasing defendants, sending letters for fake tax revenue is sufficient to plead fraud, but to show mail fraud the plaintiffs would need to explain each defendant’s role in the fraud.
Judge Wilken dismissed the complaint in part and allowed it in part. Sometime after March 2011, we will have Act I Scene II, which is the motion for summary judgment on whether the mandatory arbitration clauses are enforceable.
Posted by Unknown at 5:46 PM