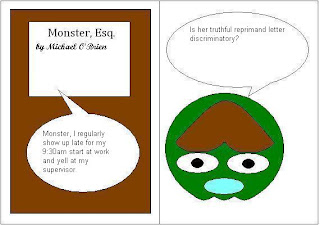 This blog will hereinafter refer to Cozzi v. County of Marin as "The Pie Case."  Maria Cozzi and MaryBeth Pascale are currently employed by the County of Marin.  They claim that the County has taken discriminatory adverse employment actions against them in violation of the Age Discrimination in Employment Act (ADEA) and the California Fair Employment and Housing Act (FEHA).  I can't make this stuff up.


[I]n late June 2006, a group of employees decided to meet at 10:30a.m. to eat a pie that one of them had baked. Pascale, who had a previously scheduled 10:30 meeting with Melendy, went instead to the gathering to eat pie. Pascale testified that "[w]e chose to have a piece of pie at 10:30 exactly, and to not be in her office exactly at 10:30." After the pie break, Pascale returned to her desk instead of going to the meeting. She found three e-mails from Melendy about the missed meeting and the need to reschedule.

These e-mails made Pascale upset. Pascale marched into Melendy’s office and stated in a loud voice, "I cannot believe that you sent these e-mails about the pie." Pascale testified that she began to argue with Melendy and told Melendy that "she needed to getover herself." Pascale also told Melendy that she would not go to her in the future, even though Melendy was her supervisor.

Ms. Pascale was not terminated after the pie incident or any future malfeasance for that matter.


In November and December 2006, Pascale was absent and tardy on a number of occasions. Melendy gave Pascale the option to come in at 9:30 a.m., but as Pascale admitted in her deposition, she still arrived late. Pascale had verbal discussions with Melendy regarding tardiness. During a six-week period in November and December 2006, Pascale was late five times and absent four times. In late December 2006, Melendy issued Pascale a work plan regarding her excessive absenteeism and tardiness.

I think the moral of this story is that you want to work for Marin County.  You can show up late, yell at your supervisor, and still keep your job.  I might be gracious for this circumstance, but Ms. Pascale sued.  You may be wondering "for what?"  Judge Phyllis J. Hamilton had the same question.


Under both the ADEA and FEHA, an adverse employment action for purposes of a discrimination claim is one that materially affects the terms, conditions, or privileges of the plaintiff's employment. See Chuang [v. University of California Davis Board of Trustees (9th Cir. 2000)]; Yanowitz v. L'Oreal USA, Inc., (Cal. 2005). Pascale has not established that any negative employment action was ever taken against her, other than the actions that were taken as a result of her insubordination or absence/tardiness. She provides no evidence showing that the County caused her to suffer "a significant change in employment status, such as hiring, firing,failing to promote, reassignment with significantly different responsibilities, or a decisioncausing a significant change in benefits." Burlington Indus., Inc. v. Ellerth, (U.S. 1998). Nor has she shown that the alleged adverse actions materially affected her "terms, conditions, or privileges of employment." Yanowitz.

Judge Hamilton granted summary judgment for the county.
Posted by Unknown at 5:17 PM