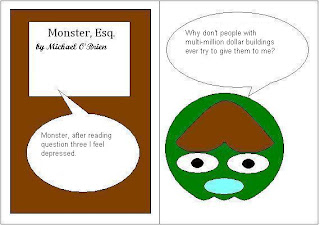 This is the fourth post in my series on the July 2011 California Bar Exam.  If you think that my answers are terrible, let me hear it in the comments.

Question three is a common law contract question which I would rate a fastball. There are plenty of issues that are not presented in a controversial or tricky way. Note that the question only asks about formation, if you talked about restitution, specific performance or some other remedy you derailed. Otherwise this is pretty straight forward. With general inquiries in contract questions there are two basic ways to approach the question. Dan Shemer, who taught my first bar review in Maryland liked the pneumonic: Until Fall Test Pressure Exhaustion Both Threaten Romance (UCC, Formation, Terms, Performance, Breach, Third Parties, Remedies). Another strategy is to consider the elements for a breach of contract in California: 1) A valid contract 2) plaintiff’s performance 3) defendant’s breach and 4) damages. I think you could use either here successfully.

Betty is a physician. One of her patients was an elderly man named Al. Betty treated Al for Alzheimer’s disease, but since she believed he was destitute, she never charged him for her services.

One day Al said to Betty, “I want to pay you back for all you have done over the years. If you will care for me for the rest of my life, I will give you my office building. I’m frightened because I have no heirs and you are the only one who cares for me. I need to know now that I can depend on you.” Betty doubted that Al owned any office building, but said nothing in response and just completed her examination of Al and gave him some medication.

One day Betty learned that Al was indeed the owner of the office building. Betty immediately wrote a note to Al stating, “I accept your offer and promise to provide you with medical services for the rest of your life.” Betty signed the note, put it into a stamped envelope addressed to Al, and placed the envelope outside her front door to be picked up by her mail carrier when he arrived to deliver the next day’s mail.

Al died in his sleep that night. The mail carrier picked up Betty’s letter the following morning and it was delivered to Al’s home a day later. The services rendered by Betty to Al over the last two years were worth several thousand dollars; the office building is worth millions of dollars.

Does Betty have an enforceable contract for the transfer of the office building? Discuss.

I will discuss below the jump

The issue is whether Betty formed a valid contract. A contract requires an offer, acceptance and consideration. An offer is a promise to do something or to refrain from doing something conditioned on the offeree’s acceptance. An oral offer lasts until the end of the conversation. Acceptance is a voluntary act of the offeree where the offeree exercises the power conferred by the offer. Consideration is a legally sufficient detriment to make a contract a binding obligation instead of a gift.

Here, Al offered to barter his building when he stated “If you care for me for the rest of my life, I will give you my office building” since he intended to do something upon Betty’s acceptance. However, when Betty, “said nothing in response” the offer lapsed. Even if the end of the conversation did not cause the offer to lapse “two years” is an extreme time for an offer to last, unless accompanied by an option and “Betty forgot” that Al had made the offer. This indicates that their minds never met within a reasonable time to create a contract.
Betty may argue that her letter to Al constituted an acceptance because she agreed to be bound by the terms of his offer. Under the mailbox rule, an acceptance forms a contract when the offeree puts the acceptance into the mailbox. Under the mirror image rule, the acceptance must be the mirror image of the offer and Betty’s letter reflected the terms of Al’s offer. Betty may argue, that this was a unilateral contract and that she could accept it by performing, which she did. Alternately, there is an exception to the mutual assent rule for physicians that perform services on patients. Physicians perform these services with the expectation that they will be paid for them. To the extent Al’s estate relies on an incapacity argument for either terminating the offer or voiding the contract it fails because no capacity is necessary in a contract for medical services. However, the here Betty “never charge [Al] for her services [because] she believed he was destitute.” Betty’s unique belief thwarts the presumption of contractual obligation. Further, her acceptance fails because her power to accept lapsed when the offer lapsed for the reasons stated above.

Assuming that the other elements are present, consideration exists because Betty’s services were “worth several thousand dollars” and Al’s building was “worth millions of dollars” and neither had an obligation to render services to the other. Al’s estate can argue that Betty’s performance of services created a duty to continue to care for Al because Al relied on those creating a contractual obligation for services under promissory estoppel. However, there is nothing to indicate that Al relied on her to his detriment, if he was wealthy he could have hired someone else to care for him and he simply appeared to stick with Betty because he liked her.

The issue is whether, assuming a contract exists, the statute of frauds prevents its enforcement. The statute of frauds states that contracts for the sale of land, or contracts for personal services that will last more than a year, must be in writing unless an exception applies. Al’s estate can argue that the barter was a land sale contract and that Al never signed a contract that could be enforced against him. Betty can respond that this was a contract for personal services for “the rest of [Al’s] life” since his life expectancy is unknown, the law assumes that it can be performed within one year even if it can (and did) take longer. Betty’s argument fails, since the agreement contains an interest in land, that portion must be in writing sufficient to satisfy the statute of frauds.

The issue is whether promissory estoppel remedies all of the problems heretofore listed for Betty. Courts will enforce a contract where a plaintiff has relied on a representation of the defendant to his detriment. Here, it is unclear why Betty believed Al was destitute if, he did in fact, have millions of dollars. Once she realized that circumstance was incorrect, she endeavored to collect for her services. So, she relied on this belief to her detriment, but Al did not state that he was destitute. To the contrary, he stated that he owned and wanted to give her a building. Betty’s reliance on Al’s appearance of indigence, was unreasonable.

For this reason promissory estoppel fails.
Posted by Unknown at 9:29 PM