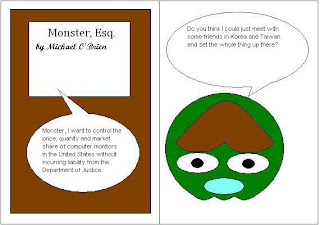 Numerous news outlets are covering this press release from the U.S. Department of Justice about an indictment against three Korean nationals reducing competition through a  price-fixing, output reducing and allocating market share conspiracy of Color Display Tubes (CDT's) that are used in Cathode Ray Tube (CRT) computer monitors.  According to PACER, the clerk of the court's preliminary assignment is to Judge William H. Alsup.

The indictment explains that there are three co-conspirators and four companies involved.  The conspirators are named the companies are listed anonymously as A-D.

According to the indictment, the named co-conspirators attended meetings in Taiwan, Korea, Malaysia and China where they discussed and agreed upon prices, output and market share of CDT's.  They acted on these agreements, exchanging CDT sales, production, market share and pricing information so they could implement, monitor and enforce the agreement.

While there is no discussion in detail of the legal theory involved.  Presumably the government is pursing this as an "antitrust per se" action.  In a per se action the activity is presumed to be an illegal restraint on trade rather than having to prove that there is a market and the action would affect competition within the market under the rule of reason analysis.  The latter can be difficult as this blog noted here.  See e.g. FTC v. Superior Court Trial Lawyers Assn. (U.S. 1990) (boycotts are a per se violation); United States v. Socony-Vacuum Oil Co. (U.S. 1940) (so are price-fixing agreements); United States v. Brown (9th Cir. 1991) (so are market allocation agreements).