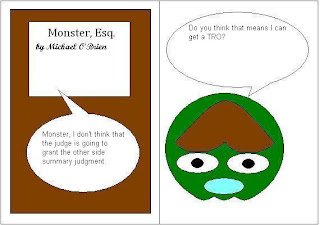 DocMagic v. Ellie Mae is a contract and antitrust dispute this blog has previously covered:


DocMagic has software which enables mortgage brokers to enter information into a Loan Origination System (LOS). DocMagic created such a proprietary system which Ellie Mae used. After the agreement went sour, DocMagic accused Ellie Mae of constinuing to use its software and Ellie Mae accused DocMagic of creating new software that loaded information into the LOS without going through Ellie Mae. DocMagic claims this is trademark infringement and, given Ellie Mae's incredible market share, an antitrust violation. Ellie Mae claims that DocMagic is using its copyrighted software and violated the Computer Fraud Abuse Act.

The facts of the case have not substantially changed and it is now before Judge Marilyn Hall Patel as DocMagic requested a temporary restraining order and Ellie Mae moved for summary judgment.  Both motions failed.


As a trier of fact could reasonably infer that $6.00 is not the price currently offered to andpaid by companies situated similarly to DocMagic, there is a material dispute as to whether EllieMae’s alleged $6.00 offer constitutes a practical refusal deal. Accordingly, Ellie Mae’s motion forsummary judgment on the [antitrust claims] in DocMagic’s Second Amended Complaint must be denied. This is not to say that the evidence in this case overwhelmingly points towards liability for Ellie Mae, but the record as currently developed raises at least a reasonable inference in DocMagic’s favor as to the existence of a refusal to deal.

This is not to say that the case substantially favored DocMagic.


DocMagic’s second theory of wrongful act [to establish an intentional interference with a prospective economic advantage claim] is that Ellie Mae has violated Section 2 of the Sherman Act. Although, for the reasons explained above, the court denies Ellie Mae’s motion for partial summary judgment on DocMagic’s Sherman Act claims, DocMagic has not presented sufficient evidence to establish its ultimate likelihood of success on these claims. There remains a material factual dispute regarding whether Ellie Mae ever offered to renegotiate the Bridge Agreement at a fair market price, but DocMagic’s evidence of the alleged refusal to deal nonetheless remains relatively sparse and circumstantial. Summary judgment may be inappropriate at this juncture, but the extraordinary remedy of a TRO/preliminary injunction is similarly inappropriate in the absence of a clear showing of entitlement.

Having denied both motions the case is now on base for trial.
Posted by Unknown at 7:35 PM