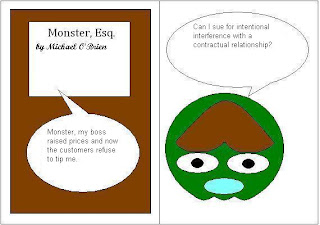 Marr v. Bank of America appears to deal with an excellent employee who was initially denied long term disability benefits and then sought reimbursement for compensation BOA allegedly denied him.  Mr. Marr worked as a mortgage loan officer who earned commissions based on the loans he made.  From those commissions BOA subtracted expenses for his assistants' salaries, and any discounts he gave on the loans.  Mr. Marr claims that the deduction from his bonus pay of his business expenses violated California Labor Code § 221. Judge William H. Alsup explains:


California Labor Code Section 221 provided at all relevant times: “It shall be unlawfulfor any employer to collect or receive from an employee any part of wages theretofore paid bysaid employer to said employee.” The most recent and comprehensive interpretation of this code section by the California Supreme Court is found in the decision of Prachasaisoradej v .Ralphs Grocery Co., (Cal. 2007), which held that a bonus system at Ralphs Grocery did not violate California law. In that case, “the [bonus plan at issue] did not create anexpectation of or entitlement to a specified wage, then take deductions or contributions from that wage to reimburse Ralphs for its business costs.” Instead, “ordinary business expenses . . .were figured in . . . to determine the store’s profit, upon which the supplementary incentive compensation payments were calculated.”

Here, calculating profits is a permissible manner of determining bonuses and this reimbusement procedure did not violate  § 221.  Judge Alsup granted summary judgment for BOA as to this claim.

Anderson v. American Airlines is Edward Anderson's second effort to claim that baggage fees at San Francisco Airport (SFO) caused him to lose tip income he received as a skycap who checked passengers' bags at the curb of American Airlines (AA).  He lost the first case on summary judgment and again on appeal at the Ninth Circuit.  His second claim faired no better.  Judge William H. Alsup explains:


The tort of interference with prospective economic advantage has five essential elements: (1) an economic relationship between the plaintiff and some third person containing theprobability of future economic benefit to the plaintiff[.] Asia Investment Co. v. Borowski (Cal. Ct. App. 1982)[.]  To negate this element, AA points to deposition testimony in which Anderson testified that he does not recognize regular or repeat customers among the passengers he servesand that the passengers have complete discretion regarding whether and how much to tip Anderson[.] In response, Anderson argues that he does not need to prove that he had an existing relationship with customers. Citing Youst v. Longo, (Cal. 1987), Anderson states that instead, “the threshold question is ‘facts showing that the plaintiff had any reasonable expectation of economic advantage which would otherwise have accrued’”[.]


Anderson misreads Youst. In footnote six, the Youst decision explicitly enumerates the five elements for intentional interference with prospective economic advantage, including “an economic relationship between the plaintiff and some third party,” as set forth above. The “threshold question” Anderson references is “a threshold causation requirement” that must be satisfied in order to maintain a cause of action for this tort. This threshold requirement exists separate from and in addition to the five elements of the tort; it serves a gate-keeping function to prevent unmeritorious claims from even reaching the five-element analysis. The exhibits that Anderson cites as establishing the threshold requirement do not raise a triable issue as to the existence of an economic relationship between Anderson and AA’s passengers.

Judge Alsup granted summary judgment for AA on each of the claims.
Posted by Unknown at 8:43 PM