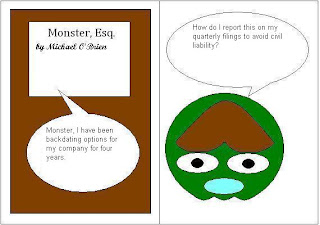 A few weeks ago the Securities and Exchange Commission (SEC) obtained an injunction and a small fine against Michael Pattison in an options backdating action.

Mr. Pattison served as the controller of Embarcadero Technologies, Inc. (Embarcadero) from January 2000 to July 2005. Embarcadero's compensation committee authorized Stephen R. Wong, the company's CEO, to grant options. Each quarter Mr. Pattison would email e-trade stating that certain employees had earned options. However, he stated that the price was the stock's lowest price in the previous quarter, rather than the date Mr. Wong approved the options. The issue was whether this was a violation of § 13(b)(5) of the Exchange Act which prohibits, " knowingly falsify anybook, record, or account...."

Options backdating is not itself illegal unless the option is not recorded in the corporate books as a non-cash compensation expense. Magistrate Edward M. Chen explains the theory of the case:


What occurred in this instance was consistent with Defendant’s regular practice of waiting until the end of each quarter to pick the date on which the share price was the lowest for that quarter,designating that date on the "grant date," submitting the list (with the retrospectively selected grant dates) of option grants to CEO Wong for approval, and then sending the list of grantees with thebackdated grant dates to E*Trade for processing.

In not one instance did Defendant state the actual date of approval by CEO Wong on any of these documents. Moreover, the PWC audits and the Board’s special investigation confirmed the practice of backdating options.

The jury could reasonably conclude that CEO Wong and Defendant represented that CEO Wong approved the grants on the grant dates listed on the grant approval summaries and other grant documents, rather than on the actual date of approval (i.e., the measurement date). In short, the jury could have concluded that as a factual matter, the grant dates recital in documents prepared by Defendant were false and misleading. Indeed, the PWC auditors all testified they were so misled.They were not told by Defendant that the option grants were backdated. As a result, the financial statements of Embarcadero during this period assumed there were no backdated "in the money" grants and hence did not record a compensation expense for the options.

That part of the case didn't really surprise me, the relief was more surprising:

Defendant is liable for disgorgement of $59,971, representing the reasonable approximation of his unjust gains resulting from the conduct alleged in the Complaint, together with prejudgment interest thereon in the amount of $14,475 for a total of $74,446

So, a three week trial results in an injunction and a judgment of $124,446?  Hindsight is 20/20, but I am pretty sure that three years of litigation cost the government a ton more than that.  That said, in many white collar cases the purpose of the litigation is to get the accused to dump a lot of money in attorney fees, so it hardly appears that Mr. Pattison escaped unscathed.

The case is SEC v. Pattison and the orders are below the jump.