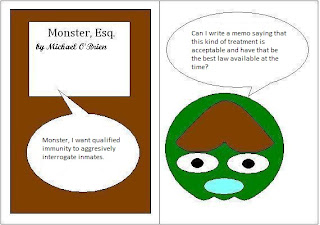 About two years ago Judge Jeffery S. White made minor headlines by ruling that Jose Padilla's claims that Berkeley Law Professor John Yoo's legal memoranda to various officials in the Bush Administration caused governmental personal to violate Padilla's constitutional rights while he was held in a military prison in Iraq.

Among other things, Professor Yoo claimed he had qualified immunity as to the entire transaction, Judge White's opinion to the contrary makes this case immediately appealable.  The legal issues are very complex, so let's dive right in to it.

Mr. Padilla claims that on May 8, 2002 he was arrested at Chicago's O'Hare International Airport pursuant to a material witness warrant issued by the U.S. District Court for the Southern District of New York.  While trying to get the warrant lifted, President George W. Bush wrote a letter to Defense Secretary Donald Rumsfeld stating that Mr. Padilla was an al Queda solider who formerly fought against the United States and ordering the Secretary to take Mr. Padilla into custody.  The Secretary complied and transferred Mr. Padilla to  the Consolidated Naval Brig in Charleston, SC.

There Mr. Padilla alleges that he was subjected to constant lighting and noise, sleep deprivation, removal of religious items, stress positions and inadequate medical attention in violation of a plethora of Constitutional rights.  He is suing Professor Yoo in an original action under the Constitution allowed by Bivens v. Six Unknown Named Agents of Federal Bureau of Narcotics (U.S. 1971).  This is where things get tricky.

In order to sue under Bivens, a plaintiff must show two things 1) there is currently no other remedy available for this situation and 2) it's a good idea to create a new kind of federal litigation.  Up front, there is a dispute on point one.  Professor Yoo argues that Mr. Padilla has another remedy - he could have filed for a petition for habeas corpus.  In fact he filed such a petition... and lost.  Judge White takes the interesting tact of viewing this issue in terms of collateral estoppel or issue preclusion.


The Court is unconvinced that Padilla's habeas petition creates an inference of estoppel. First, the Fourth Circuit merely reversed a grant of summary judgment and remanded to the district court for a factual hearing. See Padilla v. Hanft, [] (4th Cir.2005) ("Padilla V"). A reversal of a grant of summary judgment does not qualify as a final judgment for collateral estoppel purposes.

The U.S. District Court for the District of South Carolina, in a case with identical facts found that Padilla's mother could not sue Secretary Rumsfeld because Courts are cautioned against creating new kinds of federal litigation.  Lebron v. Rumsfeld (D. S.C. 2011).


The Court finds that "special factors" are present in this case which counsel hesitation in creating a right of action under Bivens in the absence of express Congressional authorization. These factors include the potential impact of a Bivens claim on the Nation's military affairs, foreign affairs, intelligence, and national security and the likely burden of such litigation on the government's resources in these essential areas. Therefore, the Court grants the Defendants' Motion to Dismiss (Dkt. Entry 141) regarding all claims of Plaintiffs arising from the United States Constitution.

Lebron is on appeal to the Fourth Circuit.  The other case dealing with these issues is Vance v. Rumsfeld (7th Cir. 2011) which split the Seventh Circuit 2-1 in favor of allowing a cause of action with somewhat different facts (U.S. Citizens held abroad).  The Ninth Circuit asked Prof. Yoo and Mr. Padilla to brief the meaning of Vance.

The majority in Vance found that a Bivens remedy should exist and that the court need not be cautioned against creating it.


If we were to accept the defendants' invitation to recognize the broad and unprecedented immunity they seek, then the judicial branch — which is charged with enforcing constitutional rights — would be leaving our citizens defenseless to serious abuse or worse by another branch of their own government. We recognize that wrongdoers in the military would still be subject to criminal prosecution within the military itself. Relying solely on the military to police its own treatment of civilians, however, would amount to an extraordinary abdication of our government's checks and balances that preserve Americans' liberty. The district court correctly allowed plaintiffs to proceed with their Bivens claims for torture.

The dissent argued that this was a judicial overreach.


I think it clear that there are special factors and precedents that should control this case. The court holds otherwise, but I would point to what I see as the five defects in the court's holding: (1) the lack of precedent in its favor; (2) the underestimation of the risks of judicial review of wartime military activity; (3) its unsuccessful attempt to distinguish precedent from other circuits; (4) the inapplicability of recent habeas corpus jurisprudence; and finally (5) the failure to recognize the consequences of its holding and the precedent it sets.

So where does this leave Mr. Padilla and Professor Yoo? This is a close question, I imagine that the Ninth Circuit will affirm Judge White and that the U.S. Supreme Court will reverse.  In two years we will see if I am correct.
Posted by Unknown at 12:12 PM