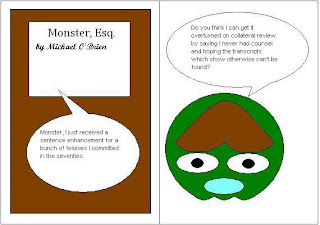 In Elerick v. Martel the prisoner proceeding pro se pleaded no contest to second degree robbery and admitted a number of prior convictions asa result he was sentenced to 28 years to life consecutive to a 25 years to life term.  Here, the petitioner is contesting the propriety of five previous convictions used to support the 25 year sentencing enhancement.  Under Lackawanna County District Attorney v. Coss (U.S. 2001), a prior conviction cannot be attacked under collateral review unless the conviction was obtained without the assistance of counsel. Here, transcripts show Mr. Elerick had counsel at his five prior convictions and he cannot attack his sentence enhancement here. Judge Phyllis J. Hamilton denied the petition.

The other petitions are appeals of a denial of parole.  As this blog has previously noted, a prisoner can be denied parole if the Board of Parole Hearings (BPH) or governor finds "some evidence of dangerousness" if there is no finding then under Haggard v. Curry (9th Cir. 2010) the case is remanded to BPH to make a finding - the District Court cannot compel the warden to release the prisoner on parole.  The "some evidence" standard requires "'something in the prisoner’s pre- or post-incarceration history, or his or her current demeanor and mental state, indicat[ing] that the implications regarding the prisoner’s dangerousness that derive from his or her commission of the commitment offense remain probative to the statutory determination of a continuing threat to public safety.'" Cooke v. Solis, (9th Cir. 2010) (quoting In re Lawrence, (Cal. 2008)).

The petitioner in Trapp v. Wong tortured and killed a man then pleaded guilty to second degree murder. Judge Phyllis J. Hamilton explained that something beyond the details of the offense was necessary to deny parole.


Here, that “something” was that (1) he described his crime as “careless,” suggesting an off-hand attitude to a particularly brutal murder, Tr. 38; (2) he fired shots at the witness, Smith, two years after the offense, showing a continuing propensity for firearms violations,id. at 44; (3) he did not participate in Alcoholics Anonymous or other substance abuse programs, despite alcohol and drug being involved in the crime and having been instructed by previous boards to participate in some sort of self-help, id. at 57-58; (4) the psychological report stated that he had a "moderate to low" risk of "violent recidivism," a level of risk the Board could consider unacceptable,id. at 71; and (5) his employment plans were not documented,id. at 92-94.

She denied the petition.

The petitioner in Perkins v. Curry plead guilty to second degree murder in 1987 and the trial judge subsequently sentenced him to 17 years to life.  Again, Judge Phyllis J. Hamilton explained that something beyond the details of the offense was necessary to deny parole.


Here, that “something” was that (1) he was belligerent, stubborn, and hostile at the hearing, suggesting that he had not learned self-control, Tr. 10-17; (2) he had at least two probation revocations and one parole revocation prior to the offense, suggesting an inability to benefit from parole,id. at 21-22; (3) he had abandoned Alcoholics Anonymous in 2002,id. at 29; and (4) he did not have any current parole or employment plans,id. at 29-30.

She denied the petition.

A jury convicted the petitioner in Moreira-Alfaro v. California Board of Parole Hearings of attempted first degree murder in 1993.  The trial judge sentenced him to seven years to life.  Again, Judge Phyllis J. Hamilton explained that something beyond the details of the offense was necessary to deny parole.


Here, that “something” was that (1) petitioner seemed much concerned withhis suffering as a result of the crime, Tr. 15-16; (2) he had been found guilty of a rule violation just the year before the hearing for having a weapon concealed in his cell,id. at 22-23; and (3) the psychological report was quite negative, finding him to be a “moderate” threat if released,id. at 34-41.

She denied the petition.
Posted by Unknown at 7:48 PM