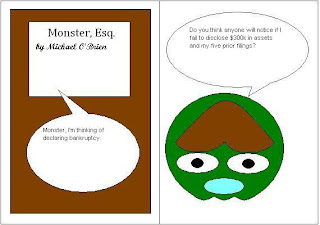 Northern District of California Bankruptcy Judge Edward D. Jellen revoked Carolyn Bell's discharge in bankruptcy due to numerous false or misleading statements in her petition.  This allows Ms. Bell's creditors to pursue their debts against her subject to two subsequent filings she has made.

In the present case the U.S. Trustee is moving to revoke Ms. Bell's discharge in bankruptcy because of numerous false statements including her failure to disclose: any of her prior bankruptcy filings; a parcel of real property in Richmond, California that she owned; the sale of a parcel of real property in Lafayette, California (when she finally disclosed the property she lied about the sale price), and her transfer of $198,000 in equity in the Lafayette Property to the buyer, a relative; her rental income her board and care business; and a van that she owned.  Ms. Bell did not deny this rather,


Bell's primary defense, rather, is the incredible proposition that she made no false oath in connection with her bankruptcy case because she e-filed her petition, schedules, and Statement of Financial Affairs through [her attorney] Swihart's law office, and because Swihart cannot now locate the original documents that Bell had signed.

Ms. Bell's defense is based on U.S. v. Naegele (D.D.C. 2007).  Naegele involved a criminal defendant who was charged with filing a false statement of financial affairs in a bankruptcy proceeding.  He defended the action by stating that he never submitted the signature page and therefore never made the false statement under oath required to substantiate the charge.  Here, Ms. Bell states that her attorney e-filed the materials, and that the materials he filed were different than the ones she submitted.  However, she did sign the signature page and there is an indication in the e-filing to substantiate that.  Judge Jellen didn't buy it:


Finally, the court notes that, under the rule suggested by Bell, any bankruptcy debtor would be free to falsify his or her bankruptcy papers, with impunity, in any bankruptcy case in which the papers are e-filed through counsel, and in which the debtor's counsel claims that he or she cannot for some reason locate the originals. Under such a rule, our bankruptcy system could not function.