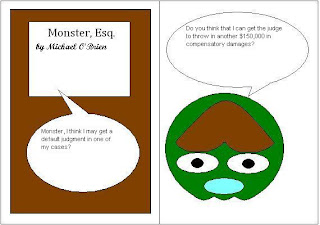 In Marks v. Green Tree Mortgage the plaintiff complains that she bought a home in Oakland, California in 1998 for $149,000.  Now, she has no idea who owns the mortgage or how much she owes.  According to her credit report, the figure is around $1,000,000.  However, others tell her the amount is $2,000,000.  Proceeding pro se, Ms. Marks argues that an entity who purchases a mortgage in default cannot foreclose upon it because that action violates the Fair Debt Collection Practices Act (FDCPA).  Judge Susan Illston was not onboard:


The Court knows of no such prohibition in the FDCPA, in another statute, or in the case law. Therefore, to the extent that plaintiff’s theories of fraud and wrongful foreclosure are premised on the idea that defendant Green Tree does not have the power to foreclose, plaintiff has failed to state a claim against either defendant.

She dismissed the complaint with leave to proceed under a separate legal theory.

Dr. JKL Ltd. v. HPC IT Education Center is a trademark and copyright infringement matter arising from a business venture gone awry.  HPC had agreed to sell Dr. JKL's software, but it never gave any license revenue back to the plaintiff.  Instead it produced the software for free download on the internet.  HPC has its headquarters in Hong Kong, its CEO, Sam. Yuen, proceeding pro se wrote a letter in the case stating that the Northern  District of California was an inconvenient forum. He has not appeared in the case since that time and the plaintiffs moved for a default judgment.  Judge Richard Seeborg granted the default judgment, but was confused as to seemingly contradictory information submitted as to the damages in the case.


Plaintiff presents it request for damages in a confusing and inconsistent manner. In the body of the motion for default judgment, it requests damages consistent with the summary above. In the concluding paragraph of the motion, however, it requests "$150,000 in actual damages and profits on the copyright and trademark infringement claims, $64,623.14 in breach of contract claims, treble damages on the Lanham Act claim, and plaintiff’s attorneys and costs (sic), in an amount to be fixed by the Court pursuant to Local Rule 5-3." [] In an affidavit filed with the motion for default judgment, Poon represents that the misappropriated security deposit for the HPC Storefront totaled $3,994.82 and that the financial injuries sustained as a result of defendants’ breach of the 2007 Agreement and the 2009 Agreement totaled $60,628.32, for combined breach of contract damages of $64,623.14. In the motion itself, however, plaintiff omits any discussion of the amount of the security deposit, stating instead that the contract damages for lost profits amounted to $60,628.32 but then listing a total of $64,623.14 for breach of contract damages in the motion’s conclusion. Additionally, despite the fact that plaintiff maintains in its motion for default judgment that it has "prove[d] defendants' revenue" and has pled copyright infringement damages of $150,000, nothing in the complaint, the motion for default judgment or any of the attached affidavits actually establishes the basis for this amount. Lastly, counsel for plaintiff includes an affidavit stating that it incurred $17,442.50 in attorney’s fees and $440.52 in costs. The billing statement attached to this affidavit, however, consists of a summary of the fees and fails to apportion any of the billing or to provide a narrative explaining any of the expenses.

Board of Trustees of the Carpenters Pension Trust Fund for Northern California v. GDT Builders is another motion for a default judgment.  GDT Builders entered into a collective bargaining agreement (CBA) with the Carpenters Union which specified contributions to the Trust fund based on the hours its employees worked.  Around July 14, 2009 GDT withdrew from the Trust.  The Trust informed GDT it owed $15,348.  GDT never paid giving rise to the current action.  Judge Samuel Conti noted that under ERISA, an employer that withdraws from a trust fund must pay the pro rata share of its unfunded liabilities.  Judge Conti granted the motion for a default judgment but noted that the Trust failed to provide information on liquidated damages or interest.  He asked it to brief the matter and declined to enter a damages judgment on the current pleadings.
Posted by Unknown at 12:16 AM