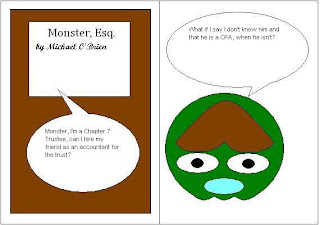 There is an episode of SpongeBob SquarePants called Money Talks where Eugene H. Krabs sells his soul to the Flying Dutchman in order to be able to talk to money.   The Flying Dutchman tries to collect on the soul when another monster yells "Get to the back of the line!" The Flying Dutchman turns to see that Mr. Krabs had sold his soul to a number of individuals and he would have to wait in line behind a number of monsters and SpongeBob to find out what, if anything, he could collect.  Bankruptcy, by definition, is a lot like that.  There is a list of secured creditor preferences based on timing of the security interest just like the line of monsters after Mr. Krabs.  If there is no soul left when your number gets called, then you recover nothing.

In re Lohrey Enterprises is a corporate bankruptcy where the Chapter 7 trustee, Richard Schwalbe tried to make his friend Kenneth L. Foster the accountant for the estate, though he was not a CPA. Once the U.S. Trustee realized Mr. Foster was not a CPA and was Schwalbe's friend it fired Mr. Foster subject to retroactive employment.  Judge Alan Jaroslovsky was not impressed.


The court finds no extraordinary circumstances such as to warrant retroactive employment. Foster had one chance to tell the court everything the court needed to know in order to properly consider his employment and failed to properly disclose his connections with Schwalbe. He also misrepresented his status as a CPA. Even negligent omissions can result in forfeiture; Foster’s failure to disclose was more than merely negligent. He knowingly failed to make a full, candid and complete disclosure.

He denied the motion for retroactive employment.
Posted by Unknown at 10:36 PM