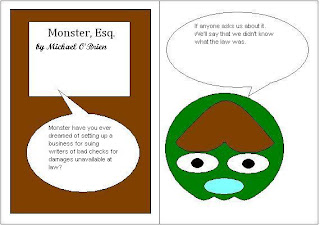 The plaintiffs allege that LRS received returned checks from merchants and wrote a series of letters to the plaintiffs.  The first letter, was under the stationary of the merchant stating that the consumer's bank returned the check and it now sought payment.  The second was a more stern version of the first.  The third was the 30-day notice required by Cal. Civ. Code Section 1719.  The fourth informed the debtor that he or she was now liable for treble damages and prejudgment interest.  Mr. Stassinos then sued the defendants in superior court, frequently obtaining default judgments.

In January 2009, the plaintiffs and Mr. Stassinos both sought summary judgment.  The plaintiff's claimed that sending letters under the header of another is a violation of FDCPA.  Further, in the case of joint checking accounts asking for treble damages from both parties instead of the person who signed the check is a violation of law.  Similarly, prejudgment interest and treble damages are available in the alternative, not in conjunction with one another.  As the court explained, all of these allegations were founded.

Mr. Stassinos defended by stating that he made a "bona-fide error" by asking for both prejudgment interest and treble damages and that he should be held harmless for the mistake.  Judge Ronald M. Whyte explained that a Circuit split exists as to whether a legal error alone can be a "bona-fide error." Compare  Baker v. G.C. Servies Corp. (9th Cir. 1982) (holding it is) with Johnson v. Riddle (10th Cir. 2002) (holding it isn't).  Notwithstanding criticism of Baker, Judge Whyte found that Mr. Stassinos violated FDCPA for these three reasons and ruled for the plaintiffs.  In June 2010, the Court stayed the proceeding against Mr. Stassinos because he filed for bankruptcy.

The case is Carrizosa v Stassinos No. C 05-2280 and the summary judgment motions are below the jump.