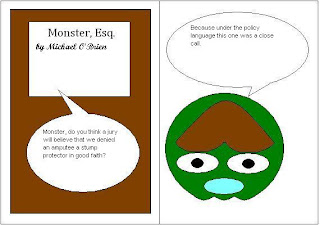 
Plaintiff Rochelle Doble is diabetic, and as a result of her disease developed an infection in her foot that ultimately required amputation. Thereafter she was prescribed a “stump protector,” a prosthetic lower leg, and a wheelchair. She argues that defendan Mega [Life & Health Insurance Co.] was obligated to pay for those three items under the terms of her insurance contract. Mega disagrees.

In the current motion, Mega seeks partial summary judgment on Ms. Doble's good faith and fair dealing claim arguing that the denial of coverage was a close call at the summary judgment stage.. Guebara v. Allstate Ins. Co. (9th Cir. 2001) ("Under California law, a bad faith claim can be dismissed on summary judgment if the defendant can show that there was a genuine dispute as to coverage").  Judge Charles R. Breyer disagreed and stated that a reasonable jury could find for either side on the good faith and fair dealing claim.  He denied the motion without prejudice to raising the issue again at the close of the plaintiff's case.

Carten v. Hartford Life & Accident Ins. is another ERISA case.  Here, Mary Carten argues Hartford 1) denied her long term disability claim 2) did so in a manner that breached its fiduciary duties to plan participants and beneficiaries with respect to its management of the plan. Hartford moved to dismiss the second claim arguing that it was duplicative of the first claim. Judge William H. Alsup noted that Fowler v. Aetna Life Insurance Company (N.D. Cal 2009) (Alsup, J.) dealt with identical issues and stated that at the motion to dismiss stage it is unclear whether the equitable releif under a breach of fiduciary duty claim necessarily overlaps with denial of benefits claim.  He denied the motion to dismiss.

Daly v. United Healthcare Ins. Co. is a breach of employment contract action.  Mr. Daly claims that United terminated him and did not give him an opportunity to earn renewal commissions which both breached his employment contract and, he argues, the covenant of good faith and fair dealing.  United cites Guz v. Bechtel Nat. Inc., (Cal. 2000) ("insofar as the employer's acts are directly actionable as a breach of an implied-in-fact contract term, a claim that merely realleges that breach as a violation of the covenant is superfluous") for the proposition that a good faith and fair dealing claim is superfluous.  Judge Lucy H. Koh distinguished Guz and explained that relief under either theory was possible:


Plaintiff alleges that Defendant terminated him without a good faith investigation into his compliance with the Agreement.This is clearly a different, albeit somewhat inconsistent, breach than the breach of contract claim.Thus, even if Plaintiff fails to prove that the Agreement did not justify Defendant in terminating Plaintiff "for cause," Plaintiff could still recover on his breach of the implied covenant of good faith claim.

She denied the motion to dismiss.
Posted by Unknown at 7:17 PM