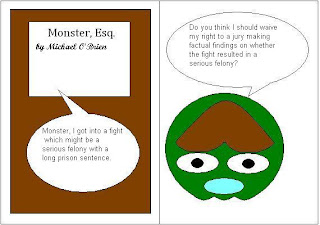 Northern District of California Judge Maxine M.Chesney granted Robert Lamar Ball's pro se petition for habeas corpus vacating his sentence enhancement from a previous conviction for felony assault.  Her order requires the State of California to either retry Mr. Ball or re-sentence him without the enhancement.

Mr. Ball's counsel then thought it was best to waive a jury trial factual determination on whether the current offenses were serious felonies under § 1170.12. However, he did this in a manner that waived Mr. Ball's right to a jury trial on any factual findings relating to whether his current offenses constituted serious felonies for purposes of § 667(a). The former only affects future proceedings, the latter affects the current sentencing.

At a separate trial on the sentencing enhancement allegations, the court found the felony assault charged in under § 245.2 was a serious felony, and that the allegations of the strikes and prior serious felony convictions were true. At the sentencing hearing, the court imposed the lower term of three years on the felony assault, doubled that term based on the prior strike, and imposed two consecutive terms of five years each for the prior serious felonies, resulting in a term of sixteen years in state prison.

Relevant to the current proceeding, Mr. Ball stated that the waiver of jury factual findings for the sentence enhancement was ineffective assistance of counsel. In a pretty good legal move, he did not raise this claim in his substantive appeal, rather he raised it for the first time in his state habeas petition. Since neither the California Court of Appeals or the California Supreme Court produced a reasoned decision Judge Chesney reviewed the matter without deference to a previous decision. See Richter v. Hickman (9th Cir. 2009) (en banc) ("Where, as here, no state court has explained its reasoning on a particular claim, we conduct an independent review of the record to determine whether the state court's decision was objectively unreasonable.")(internal quotations omitted).

In the Ninth Circuit, ineffective assistance of counsel is not subject to the harmless error analysis that normally limits habeas review.  Avila v. Galaza, (9th Cir.2002) ("We need not conduct a harmless error review of Strickland [ineffective assistance of counsel] violations under Brecht [v. Abrahamson (U.S. 1993)], because '[t]he Strickland [v. Washington (U.S. 1984)] prejudice analysis is complete in itself; there is no place for an additional harmless-error review.'")

This blog has explained the Strickland standard before:

One of the issues in Elena Kagan's Supreme Court confirmation hearings was her view on the standard for vacating a conviction for ineffective assistance of counsel. Under the Sixth Amendment and Fourteenth Amendments a criminal defendant in a felony case has a right to an attorney. It's possible, at least theoretically, that the attorney could be so bad that 1) the attorney's handling of the case fell below an objective standard of reasonableness and 2) this case handling gave rise to a reasonable probability that, had the case been properly handled, there would be a different result.


[T]he Court finds defense counsel’s performance was deficient. Although the Court has found it was not unreasonable for the state courts to find a jury waiver based on the objective record before the trial court, nothing in that record directly contradicts defense counsel’s declaration as to his subjective understanding. Indeed, this Court can think of no tactical advantage in defense counsel’s waiver of a jury finding as to the actual predicate for an enhancement based on the very issues presented to the jury on the charged offense, let alone a highly contested issue such as petitioner’s use of the chain.

She granted the petition for habeas corpus.  The Case is Ball v. Sisto No. C 07-2726 and the opinion is below the jump.