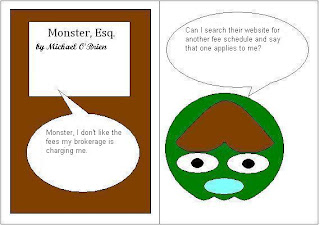 Several Judges in the U.S. District Court for the Northern District of California have recently released orders in bankruptcy and contract cases, among them:

In Roling v. E*Trade involves a putative class action about fees on the defendant's accounts.  The parties had a master brokerage agreement that provided brokerage fees would be displayed on the defendants website.  Joseph Roling alleges that several versions of that document were on the website, none of which provided for a quarterly inactivity $40 fee.  He claims this is a breach of contact.  E*Trade points out that the fee schedule is labeled "Brown & Co. Special Fee Schedule" and only applies to customers that it obtained when it acquired Brown & Co.  Instead the Main Street Investor fee schedule applies to Mr. Roling.  Judge Marilyn Hall Patel stated,


Because there are two reasonable interpretations of this provision, the contract is ambiguous. Since no extrinsic evidence can be considered at this stage, the motion to dismiss the breach of contract claim must be denied.

She denied the motion to dismiss.

Johnson v. Lafayette Capital is an adversarial hearing in a Chapter 13 bankruptcy proceeding.  This involves standard mortgage claims under the Truth in Lending Act (TILA) to rescind her 2007 mortgage loan, and for common law fraud.  Bankruptcy Judge Andrew S. Weissbrodt found that both recession and fraud were adequately fraud, as a result the claim for punitive damages also survives defendant's motion to dismiss.

Son v. Park is an appeal of the bankruptcy court's decision.  The case begins in 2004 when Son contracted Park to build him a house.  After a dispute, Park sued Son and the parties settled for $380,000, but if Son missed a payment Park would get $480,000.  After the first payment became due Son declared bankruptcy.  Park then moved for summary judgment under § 523(a)(2)(A) stating that the debt was non-dischargable.

Judge Marilyn Hall Patel found that the bankruptcy court's findings of fact were not clearly erroneous:


The Bankruptcy Court’s determination that the property received by Park is of no value is not clearly erroneous, and thus his damages are measured as the amount paid to Son together with the losses proximately caused by Son’s fraud.

She affirmed the judgment of the bankruptcy court.
Posted by Unknown at 12:37 AM