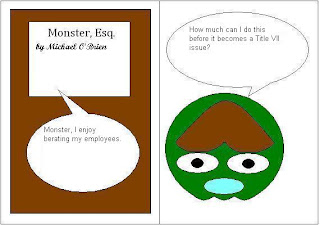 Here are some of the other orders judges have released in the U.S. District Court for the Northern District of California.

Davis v. CDCR is a complaint of employment discrimination under Title VII of the Civil Rights Act of 1964 and the California Fair Employment and Housing Act (FEHA).  Dr. Davis worked as a contract social worker for CDCR at Pelican Bay State Prison from July 31, 2000 to December 31, 2007. She interviewed for a job as a civil servant but did not receive it, her employment was terminated due to CDCR's new policy of using civil servants instead of contractors. Dr. Davis alleges that her coworker, and later supervisor, David Mandel harassed her throughout her tenure at PBSP by standing outside the ladies' room and providing feedback on how long she had been in the restroom, regularly berating her at meetings, physically attacking her once, and allowing prisoners to masturbate in counseling sessions with her. She repeatedly complained about his behavior but only received a response after several years, transferring her to another supervisor's control. Judge Saundra Brown Armstrong used the same language she had used in two previous cases (Wheeler v. Chertoff, (N.D. Cal. July 17, 2009) and Pascual v. Astrue (N.D. Cal. April 27, 2009)) to dispose of the current matter:


In contrast, the Ninth Circuit has rejected hostile work environment claims involving circumstances far more severe and pervasive than those at issue here. See Sanchez v. City of Santa Ana, (9th Cir. 1990) (affirming conclusion that plaintiffs failed to prove a hostile work environment even where the employer allegedly made racially offensive slurs, kept illegal personnel files on the plaintiffs because they were Latinos, provided unsafe vehicles to Latino police officers, posted a racially offensive cartoon, targeted Latinos when enforcing rules, and did not provide adequate back-up to Latino police officers); Vasquez [v. County of Los Angeles], [(9th Cir. 2003)] (finding no hostile environment even where plaintiff was told that he should consider transferring to work in the field because “Hispanics do good in the field,” was told that he had “a typical Hispanic macho attitude,” a co-worker made continual, false complaints about the plaintiff to his supervisor, and plaintiff was yelled at in front of others); Manatt v. Bank of Am., (9th Cir.2003) (finding that jokes using the phrase “China man,” ridiculing for mispronunciation of names, and employees pulling their eyes back with their fingers to mock the appearance of Asians did not constitute a hostile work environment for a Chinese woman).

She granted the motion for summary judgment.

Nobleza v. Macy's Inc., is a putative class action regarding employees of companies acquired by Macy's under the Employee Retirement Savings Investment Act (ERISA).  Under the plan, employees must apply for benefits between age 65 and 68.  The plaintiffs allege that the company failed to inform them of their eligibility to obtain pension benefits at age 68.  Judge Ronald M. Whyte is a bit surprised by the legal theory involved:


Interestingly, in defending their selection of age 68 rather than age 65 as triggering a fiduciary duty to locate and notify, plaintiffs take the position that failing to notify Plan participants of their eligibility at age 65 does not frustrate the purpose of the Plan. Plaintiffs appear to acknowledge that since Plan participants may intentionally choose not to apply for benefits as soon as they become eligible (at age 65), one cannot assume that their failure to apply for benefits is due to not being aware of their eligibility. Yet the same is true at age 68.

Macy's responded that even if it failed to inform the plaintiffs of their benefit eligibility, they now know and have suffered no harm.  The plaintiffs respond with two theories of harm 1) if they failed with withdraw by age 70 1/2 they would incur tax penalties and 2) Macy's should write the IRS and ask for a tax penalty exemption.  Judge Whyte explained that neither of these was a sufficient harm to confer standing.


[T]he Ninth Circuit has held that money damages, such as recovery for tax losses, are outside the scope of the"appropriate equitable relief" that may be obtained under Section 502(a)(3). Farr v. U.S. West Commc'ns, Inc., (9th Cir. 1998). Thus, the court may not require payment of tax penalties as requested.

[T]he amended complaint does not contain any allegations suggesting that it is likely,as opposed to merely speculative, that defendants' petition for a waiver of tax penalties would begranted. To the contrary, the fact that the prayer for relief seeks payment of tax fines by defendants "inthe event that petition is denied" implies that plaintiffs themselves are concerned that such a petitionmay be denied.

He granted the motion to dismiss with leave to amend.

In Big Lagoon Rancheria v. California, the indian tribe has tried to negotiate a gaming license with the State of California since 1998.  The Tribe now contends that the state has negotiated in bad faith and seeks a court order requiring the State to negotiate in good faith under the Indian Gaming Regulatory Act (IGRA).  The tribe wants to construct a gaming facility and hotel on its land in Humboldt County, the State will agree to a compact, but only if the tribe agrees to a revenue sharing plan and a complete environmental review of the project.  As Judge Claudia Wilken explains:


Big Lagoon asserts that the State's failure to negotiate in good faith is evidenced by the State's requests for general fund revenue sharing, insistence that the tribe comply with various environmental and land use regulations and recommendations that the Tribe site its gaming facility off its tribal lands.

Judge Wilken agreed that this amounts to taxation of the tribe and is evidence of negotiating in bad faith.  The burden then shifted to the State to explain how it was negotiating in good faith.  The State takes the somewhat desperate approach of arguing that the precedents that show revenue sharing is bad faith are wrongly decided, even though they are dispositive of the issue.  Judge Wilken granted summary judgment for Big Lagoon Rancheria and ordered the parties into mediation.
Posted by Unknown at 9:00 PM