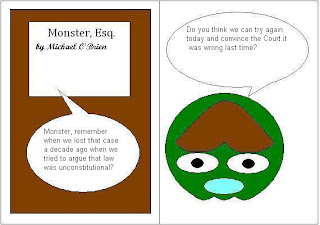 This blog has previously covered Coalition to Defend Affirmative Action v. Schwarzenneger. As noted before:


SEC. 31. (a) The State shall not discriminate against, or grant preferential treatment to, any individual or group on the basis of race, sex, color, ethnicity, or national origin in the operation of public employment, public education, or public contracting.

Basically, there is no affirmative action in California. The Coalition (oddly misspelled "Coalitition" in the order) would like this section declared unconstitutional. They seek an injunction allowing the state to engage in affirmative action if it so desires. This case is interesting since the Ninth Circuit found Section 31 constitutional in Coalition for Economic Equity v. Wilson (9th Cir. 1997).

It what is becoming a trend (or policy) neither the Governor, Attorney General nor President of the University of California decided to defend the policy based on Ward Connerly’s voter iniative. Mr. Connerly intervened in the suit and filed the motion to dismiss Judge Samuel Conti had requested in October.

The Coalition argues that Art. I Section 31, as applied, discriminates on the basis of race because there are fewer Latinos, African Americans and Native Americans at UC Berkeley and UCLA then there are at UC Merced and Riverside which is an as-applied violation of the Equal Protection Clause. Judge Conti noted that this ship has sailed:


Additionally, Plaintiffs devote a great deal of space in their Opposition to criticizing the logic of Wilson. They make these arguments to the wrong court, as this Court is bound by stare decisis. "A district judge may not respectfully (or disrespectfully) disagree with his learned colleagues on his own court of appeals who have ruled on a controlling legal issue, or with Supreme Court Justices writing for a majority of the Court." Hart v. Massanari, (9th Cir. 2001).

He dismissed the complaint with prejudice.
Posted by Unknown at 5:25 PM