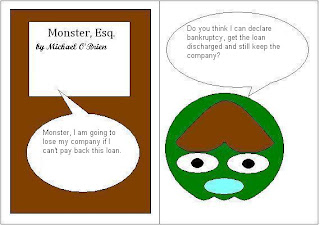 As Judge Alan Jaraslovsky noted in one of the cases below, it is "a swamped bankruptcy court in the middle of a recession."  Here are some of the latest memorandum orders from the U.S. Bankruptcy Court for the Northern District of California.

In re Burns is a Chapter 13 bankruptcy proceeding. Debtor Mara Burns seeks damages for a violation of the automatic stay under 11 U.S.C. § 362(k)(1).

The case begins back in 2006 when Maxine Lee Norman died. Ms. Burns was the administrator of Ms. Norman’s estate. Kimberly Hervey believed that Ms. Burns owed her some money and an interest in real property as a result of her actions as administrator. On March 6, 2009 Ms. Burns filed a voluntary Chapter Thirteen petition. Attorney Scarlet Gordon was on notice and filed some papers about nine months later, on behalf of Ms. Hervey. For some unknown reason, she also filed a petition on February 24, 2010 for the return of Ms. Hervey’s property in Alameda County Superior Court. This petition is the basis of Ms. Burns’ § 362 claim against Ms. Gordon.

Ms. Gordon argued that the Bankruptcy Court lacked jurisdiction to hear the matter because of Marshall v. Marshall (U.S. 2006) (finding a narrow “probate exception” to federal court jurisdiction limited to, “probate or annulment of a will and the administration of decedent's estate….” Judge Edward Jellen summarily dismissed that claim:


The court holds that the actions Gordon took in the Superior Court were against Burns, personally, and not against Burns in her capacity as Administrator.

In re Lake County Grapevine Nursery Operations is a Chapter 11 petition involving a grape business. Here is the cast of characters:


There is of course some temptation to grant the motion to dismiss, as there are ample indications that this Chapter 11 case was filed in an attempt by Kaesekamp and NVWI to maintain control of the debtor notwithstanding their breach of their agreements. However, a rule allowing dismissal for the reasons stated in the motion would create confusion and disputes over the legitimacy of filings whenever an ownership interest in the debtor has been pledged as security. Such uncertaintyis avoided by a clear rule: only the members or lawful managers are entitled to vote on behalf of a limited liability company, notwithstanding a pledge of membership rights as collateral.

He denied the motion to dismiss, but noted that does not mean that Mr. Hollerith is without remedies.


The court is quite willing to entertain a motion pursuant to § 305(a) of the Bankruptcy Code seeking to stay Chapter 11 proceedings until Hollerith has taken the proper steps to replace Kaesekamp and NVWI as members.

In re Lopez is a Chapter 13 petition which exposes a circuit split in applying the “cramdown” rule on a first mortgage secured by a primary residence. Mr. Lopez has a loan on his primary residence secured by a mortgage and deed of trust held by Wells Fargo. He argues that the Wells Fargo claim should be limited to the value of the property because he has made improvements to the property which should be classified as personal property and not real property. That is the rule in the In re Ennis (4th Cir. 2009). However, as Judge Edward Jellen explains, the 9th Circuit takes a different tack:


Lee v. Home Savings of America, (9th Cir BAP 1997), [held] that chapter 11 debtors were prohibited from modifying the first lien against their primary residence, even though that lien encompassed additional collateral. In so holding, the BAP adopted the reasoning of In re French, (Bankr. D.Mass 1994), which held that so called “additional collateral” does not divest a lien holder of the anti-modification provision of § 1322(b)(2) where the collateral is “nothing more than an enhancement which is or can, by agreement of the parties, be made a component part of the real property or is of little or no independent value.”

In re Mendoza is a Chapter 11 petition. U.S. Bank seeks to amend its claim to add an additional $600,000 (to $4.6 million). Mr. Mendoza, claimed that this would require the entire plan to be reworked resulting in additional attorney’s fees and causing him prejudice. Judge Alan Jaroslovsky stated that fees and expenses cannot create prejudice.


Contrary to Mendoza’s assertions, neither attorneys’ fees and expenses contesting the amendment nor a reduced dividend to other creditors constitutes prejudice. Smith v. Lenches, (9th Cir.2001) (prejudice means prejudice to a legal claim or interest, not having to incur litigation expenses); In re Arnold, (9th Cir. BAP 2000)(theoretical disappointment of creditors, without proof of actual damages, cannot support a finding of prejudice); Manousoff v. Macy's Northeast, Inc. (In re R.H. Macy & Co.), (S.D.N.Y.1994) (the depletion of resources otherwise available for other claims is not prejudice).

Victorious, U.S. Bank couldn’t leave good enough alone and wanted to take attorney’s fees onto its claim under § 506(b). The pleading on that matter was strange as Judge Jarolsovsky.


The parties have apparently stipulated that the court should decide the dispute without oral testimony. The court reviewed the Supplemental Declaration of Ross Newman filed on November 3, and frankly does not see what the problem is. However, in reviewing the docket the court sees Mendoza’s representation that the Newman declaration is not to be considered. This makes no sense to the court, although it makes it easy. If the Bank has stipulated that the declaration should not be considered, it has not met its burden and should not be allowed any postpetition fees or expenses.

He denied the motion for postpetition fees and expenses.

Poonja v. International Contract Technologies Inc. is an adversarial proceeding in the Mesatronic USA Chapter 7 bankruptcy. Mohamed Poonja is the trustee of Mesatronic’s bankruptcy estate. He conducted a sale of all of Mesatronics assets. At issue, is whether a PBRX III machine was included as part of the estate. When ICT viewed the property it saw the device, and it was on a few lists of property. However, it was not on the Trustee’s list and Mr. Poonja stated at the auction the PBRX III was not part of the estate because Mesatronic did not own it. ICT won the auction but never paid because it did not get the PBRX III. Mr. Poonja resold the items for far less than ICT bid for them and sued ICT for the difference.

The only issue is whether the parties formed a contract. Judge Stephen L. Johnson ruled that they did:


A unilateral mistake may be grounds to find that a contract has not been formed properly. But a unilateral mistake is not grounds to void a contract if the party making the mistake failed to investigate properly. Under the Restatement (Second) of Contracts § 154, a party bears the risk of mistake when “he is aware, at the time the contract is made, that he has only limited knowledge with respect to the facts to which the mistake relates but treats his limited knowledge as sufficient.” At trial, it was clear there were several lists of equipment owned by the Debtor. Geary testified that he relied exclusively on the list Lewis gave Poonja in July, which shows a PBRX III. Geary ignored better information, including the Trustee’s Sale Notice – which omitted the PBRX III. He also admits being told at the auction the PBRX III was not included. The court finds that ICT bore the risk of making this mistake because it failed to investigate or confirm that the PBRX III was included in the sale after being told the equipment was not included.

Judge Johnson granted judgment for Mr. Poonja in the amount of $97,399.
Posted by Unknown at 5:03 PM