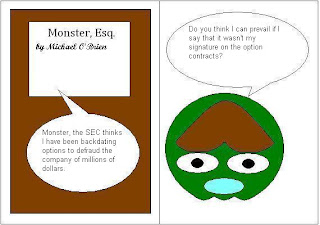 Several Northern California Courts have recently ruled in Securities cases, among them:

Brown v. Moll is a shareholder derivative action involving Hansen Medical, Inc. Hansen makes medical robots such as the Sensi system. Mr. Brown alleges that Hansen improperly accounted for revenue from the sale of the Sensi system, causing it to restate and adjust its earnings between 2007 and 2009. The defendants move to dismiss by stating that Mr. Brown failed to first send their corporate claim to them, which is necessary for standing in a derivative action. Mr. Brown responded that any such effort would have been futile because the directors had a vested interest in continuing to misstate earnings, which excuses his demand requirement. In particular he relies on Pfeiffer v. Toll (Del. Ch. 2010) which held that in a small company, knowledge of a company’s core operations can be inferred to board members. Judge Susan Illston noted that Pfeiffer had the distinguishable circumstance of the board member defendants already being accused of federal securities fraud and that complaint survived a motion to dismiss. It was the securities fraud complaint in discovery combined with the knowledge of core operations that made the demand futile. She granted the motion to dismiss.

In Schroeder v. SEC, the SEC chose to pursue civil liability against Kenneth L. Schroeder and accused him of unlawfully backdating options grants and submitting false financial statements for KLA-Tencor Corporation. According to the SEC he made millions of dollars from this endeavor. In June 2010, the parties stipulated to a partial final judgment where Mr. Schroeder did not admit wrongdoing, was enjoined from committing future securities fraud and agreed to pay a civil penalty of $275,000. The factual allegations against Mr. Schroeder had some admitted shortcomings, like his signature being forged on the backdated options.

Now the SEC would like to bar Mr. Schroeder from serving as an officer or director of a publicly held company. There is some debate as to the standard of proof required in such a case as Judge James Ware explains:


SEC v. First Pac. Bancorp., (9th Cir. 1998) (quoting 15 U.S.C. § 78u(d)(2)); see also SEC v. Hilsenrath,  (N.D. Cal. May 30, 2008) (Alsup, J.). In the Sarbanes- Oxley Act of 2002, Congress lowered the SEC’s burden in seeking a director and officer bar from showing “substantial unfitness” to serve to only showing “unfitness” to serve. SEC v. Levine, (D.D.C. 2007). Based on this reduced burden post-Sarbanes-Oxley, SEC contends that the Court should adopt the unfitness test adopted by the D.C. district court in Levine. In that test, the Court also considers the defendant’s acknowledgment of wrongdoing and credibility of the defendant’s contrition as unfitness factors. See Levine. Since the Ninth Circuit has not adopted the Levine test, and at least one court in the district has continued applying First Pacific Bancorp after Sarbanes-Oxley’s removal of “substantial” from the statutory language, the Court will only consider the First Pacific Bancorp factors here. However, the Court finds that in this case, both tests would yield the same outcome.

Judge Ware found that Mr. Schroeder had been punished enough. Since the SEC investigation, he has been unable to find work which has operated as a four year bar from being an officer, director and anything else. The proof of forgery also questions the scienter element needed for the director bar.

He denied the SEC’s motion.
Posted by Unknown at 9:13 PM