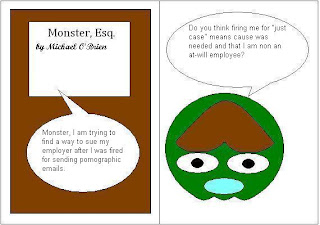 Mapes v. City of Union City is a complaint for employment discrimination and retaliation under Title VII of the Civil Rights Act of 1964. Laura Mapes’s interesting claim is for common law negligent retention in that the City hired Carlos Rodriguez as assistant fire chief despite that he was unqualified for the position. Judge Richard Seeborg stated that he was not certain how she had standing to contest the hiring decision in that light however, if she applied for the job and it went to a less qualified man instead then that could be a Title VII violation. He dismissed the complaint with leave to amend.

Contreras v. Tyco Electronics Corp. is a wrongful termination case. Mr. Contreras and others worked for Tyco for several years before the company terminated them after finding pornographic emails sent from their password protected work email accounts. They sued for wrongful termination. Tyco responded very early in the litigation stating that Mr. Contreras and the others were at-will employees and that they had no expectation of continued employment. Judge Charles R. Breyer rejected the argument stating that it wasn’t clear whether there was an employment contract or not. Now that discovery is complete we are ready to roll:


In determining whether there was an implied-in-fact employment contract a court can consider several factors, including (1) personnel policies or practices of the employer; (2) the employee’s longevity of service; (3) actions or communications by the employer reflecting assurances of continued employment; and (4) practices of the industry in which the employee is engaged.  Foley [v. Interactive Data Corp., (Cal. 1988)].

With regard to personnel policies:


Plaintiffs point out that, notwithstanding Tyco’s stated policies, Plaintiffs’ personnel files state that they were fired for “just cause.” This, in Plaintiffs’ view, shows that Tyco itself believed that cause was necessary and that, therefore, Plaintiffs must have had an implied employment contract. This argument is too clever by half. At-will employees, just like employees operating with employment contracts, can be fired for cause. Accordingly, providing in a personnel file that an employee was terminated “for cause” is irrelevant to whether the employee had an implied employment contract. The fact that you do not need a reason to fire an at-will employee does not mean that, if you provide a reason, you have converted the employee from at-will status.

Judge Breyer also dismissed remainder of the arguments and granted summary judgment for Tyco.
Posted by Unknown at 5:55 PM