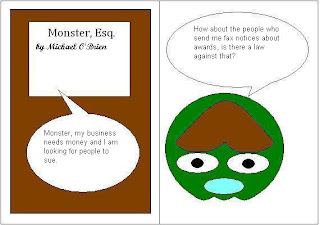 Several judges in the U.S. District Court for the Northern District of California recently released opinions in mortgage and other lending cases among them:


The Junk Fax Prevention Act prohibits the sending of an "unsolicited advertisement." 47 U.S.C.§ 227(b)(1)(C). An "unsolicited advertisement" is “any material advertising the commercial availability or quality of any property, goods, or services which is transmitted to any person without that person’s express invitation or permission, in writing or otherwise." 47 U.S.C. § 227(a)(5); accord 47 C.F.R. § 64.1200(f)(13).


In sum, the application for the USPAACC-Wells Fargo Asian Business Leadership Award is not only different than these overt advertisements, but also, it is entirely distinguishable from “free”seminars that really are pretexts for advertising. As an application for a benefit, it is similar to a solicitation for bid proposals for a construction project, or a notice of employment opportunities, or the invitations to participate in the research study or clinical trial in Phillips Randolph [v. Adler-Weiner Research Chicago, Inc. (N.D. Ill. 2007)] and Ameriguard [Inc. v. University of Kansas Medical Center Research Institute, Inc., (W.D. Mo. June 23, 2006)].

She granted the motion to dismiss with prejudice.

Slowjewski v. Polam Federal Credit Union is a mortgage foreclosure case where the plaintiff asserts a claim for violations of the Truth in Lending Act (TILA).  In 2007, Polam agreed to refinance Mr. Slowjeski's mortgage in the amount of $720,000.  After July 2008, Mr. Slowjewski stopped making payments on the loan.  Polam sought non-judicial foreclosure and Mr. Slowjewski sought to rescind the loan.  Polam purchased the property at the foreclosure sale and sought to evict Mr. Slowjeski.  He asserts two causes of action: a violation TILA by having the finance charge understated in the loan paperwork by $35 and a wrongful purchase of the property at the foreclosure sale after recission.  Mr. Slowjewski's efforts are ultimately thwarted by his own inconsistent testimony under the Katy Perry Rule.  This blog has previously explained:


In her song, Hot 'n Cold Ms. Perry states, "You change your mind like a girl changes clothes...you overthink [and] always speak cryptically [therefore] I should know that you're no good for me." Similarly, witnesses who later change their mind are unreliable.


Here, the Plaintiff testified at his deposition that he had no reason to believe that FedEx or wire services were required by the Credit Union. Defendant’s testimony is that the services were not required. Ten days later, Plaintiff submitted a declaration in opposition to the Defendant’s motion for summary judgment in which he states the opposite.

Newson v. Countrywide Mortgage involves the equitable owners of a residence in Woodside, California.  Julie Whiteside is an employee of America's Wholesale Lender which is a division of Countrywide.  According to the complaint, Ms. Whiteside told the plaintiffs she could get them a great deal on a $2.15 million "no cost, no fees" mortgage with 6% interest on a first mortgage, an 8% interest rate on the second mortgage.  However, at signing, there was a different deal on the table, with 6.75% the first mortgage and 12% on the second. To get this new deal, Ms. Whiteside inflated the plaintiff's monthly income from $30,000 to $47,000.  When the plaintiffs received their first statement they were shocked and sought to rescind the loan.

In a previous complaint the Newsons adequately pled fraud against Ms. Whiteside, now they are trying to impart that fraud onto Countrywide.  Countrywide claims that Nymark v. Heart Fed. Savings & Loan Assn. (Cal. App. 1993) precludes the claim, but Judge Saundra Brown Armstrong didn't see it that way. Nymark contained the following factors determine whether a lender owes a duty of care to a customer:


In California, the test for determining whether a financial institution owes a duty of care to a borrower-client "`involves the balancing of various factors, among which are [1] the extent to which the transaction was intended to affect the plaintiff, [2] the foreseeability of harm to him, [3] the degree of certainty that the plaintiff suffered injury, [4] the closeness of the connection between the defendant's conduct and the injury suffered, [5] the moral blame attached to the defendant's conduct, and [6] the policy of preventing future harm.

Countrywide made no effort to argue those factors so Judge Armstrong denied their motion to dismiss.
Posted by Unknown at 11:57 PM