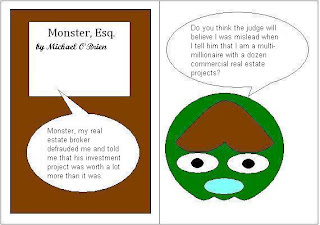 Several U.S. District Court for the Northern District of California Bankruptcy Judges have recently released memorandum decisions, among them:

Martinez v. Vergara is an adversary proceeding where Arturo Martinez is trying to render nondischargable a debt owed to him by Eduardo Vergara (an attorney and real estate broker).  Mr. Vegara contracted to pay Mr. Martinez for $910,000 for a residential rental property that was, "in a state of disrepair." Bankruptcy Judge Edward D. Jellen explains


On October 19, 2005, Martinez conveyed the Property to Vergara by grant deed. Vergara’s purchase money debt to Martinez was unsecured.

That would seem like a bad idea.  Mr. Vergara didn't make much money off the property which he eventually lost in foreclosure, and, at the time of his Chapter Seven petition, he had paid $86,945 on the note to Mr. Martinez.  Of the claims presented, the § 523(a)(4) makes the most sense, Mr. Vegara, as an attorney had a fiduciary responsibility to Mr. Martinez which would render the debt non dischargable.  Judge Jellen said he didin't:


As to the latter, it is true that at the time of the purchase,Vergara was a licensed real estate broker, and a licensed attorney.  It is also true that Martinez trusted him.

This, however, does not create a fiduciary relationship within the meaning of Bankruptcy Code § 523(a)(4).   In their dealings,Vergara acted as a principal, not as a broker or attorney. A provision in the purchase agreement so stated.

He ruled for the debtor.

In re Yan is the rather surprising bankruptcy estate that has a surplus, $380,000.  After learning about the surplus two insider creditors with notice of the claims bar date and the final account filed tardy claims, perhaps unsurprisingly, in the amount of the surplus. Judge Thomas E. Carlson denied the late filing extension:

He denied the motion to add a claim.

Jenkins v. Salma is similar to Martinez in that it is an adversary proceeding where Lew and Linda Jenkins trying to render nondischargable a debt owed to them by David Salma.  In March 2009 the Jenkins sued Mr. Salma for non-payment of a promissory note on property and obtained a judgment in the amount of $2,163,632 (they were the junior creditor and received nothing from the foreclosure sale).  The following month Mr. Salma filed the subject Chapter Seven petition.The plaintiffs assert that the debtor knowingly submitted an inflated rent toll to Far East National Bank which forwarded that rent roll to Property Sciences Group that used the inflated rent roll in preparing an appraisal.  The Jenkins relied on the erroneous $7.67 million property value when they made the loan.

Judge Thomas E. Carlson did not believe that the Jenkins were mislead about the risk involved in the situation.  Mr. Jenkins sold a software design company and then invested the money in ten commercial real estate ventures, some worth as much as $11M and that the value depended on getting four new tenants in place (which never happened).  Judge Carlson gave a shout to to both counsel stating they did a particularly good job, and here the debtor prevailed.
Posted by Unknown at 12:50 AM