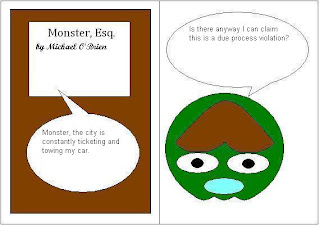 DeLarge v. Hayward Unified School District is an employment grievance plead as a civil rights matter.  Hayward Unified School District employed Demetria DeLarge as a paraeducator in the Youth Enrichment Program (YEP).  The District disciplined Ms. DeLarge a number of times from November 2006 until her termination on March 18, 2008.  She was suspended at least three times and received five letters of reprimand for using her cell phone at work and unspecified other behavior.  When she tried to appeal various discipline she received, she was ignored and the District terminated her email access.  I would guess that she missed the statute of limitations for a typical Title VII/FEHA employment greviance, so she is proceeding as a civil rights matter under 42 U.S.C. § 1983.  Judge Jeffery S. White dismissed most of her claims.

He stated that the only event which could form a viable 1983 claim is her termination.  However, she fails to explain how the process deprived her due process.  To wit, she admits she did not attend her termination hearing.  He gave her another chance to state a claim and dismissed the claims with leave to amend.

If you have ever seen the movie Milk, you may think that people protest gay rights issues in San Francisco all the time without any disruption in activity from the police.  Holland v. San Francisco presents another view of that.  Elicia R. Holland and others were protesting the California Supreme Court's decision in Strauss v. Horton (upholding Proposition 8 which banned gay marriage in the state) when a bunch of police officers beat her up and charged her with battery.  The officers took her to San Francisco County Jail where they strip searched her and placed her in solitary confinement.  Now, the City is moving to dismiss the claims relating to the strip search.

This blog previously covered Bull v. San Francisco which dealt with the same issue, albeit in more detail.  Basically, if a prisoner will be placed in the prison population, then a strip search is authorized.  If not, the prison authorities need reasonable and articulable suspicion.  Here, Ms. Holland alleges that there was a sign outside her door informing the guards to segregate her from the general prison population.  The City responded and stated that her offense alone - battery of a police officer - was sufficient to create reasonable and articulable suspicion.  Judge Thelton E. Henderson disagreed, essentially arguing that since any touching can be battery, it is not a crime of violence:

He denied the motion to dismiss.

Barber v. Santa Rosa involves the fatal shooting of a mentally challenged man by Santa Rosa police officers.  Jesse Hamilton was wielding a butcher's knife in a group home when one of the care workers caleld the Santa Rosa Police.  A few officers responded and tried to get Mr. Hamilton to leave his room and surrender his weapon.  He didn't instead he charged the police.  One responded with a taser, another responded with four bullets from a service revolver.  Mr. Hamilton flailed while he was continually tased until other officers were able to handcuff him.  The police allege in their depositions that the taser did not slow down, let alone stop, Mr. Hamilton.  The plaintiffs think this is ridiculous and found an expert to refute the defendants' allegations. The case seems like a close call on summary judgment, except that the expert is not much of an expert.


According to Clark’s [the defendant's expert] report, he is a veteran police officer, who served in a number of positions, and who possesses a California Peace Officer Standards Training (POST) Advanced Certificate and is a graduate of the POST Command College. [He] does not "claim to have any scientific, technical or any other specialized knowledge regarding the success rate of electronic-controlled devices or tasers." [C]onsequently, even assuming Clark’s qualification to offer an opinion as to the general use and deployment of tasers, plaintiffs fail to show he qualifies as an expert on the physiological effect of Officer Yaeger’s taser on Hamilton.

Riley v. San Francisco deals with a scourge of all urban dwellers - parking tickets and municipal towing.  Mr. Riley argues that the City towed his car after he left it parked on the street for eight days and that the city policy of towing after 72-hours without any posted signs violated his rights under the Due Process Clause of the Fourteenth Amendment.  The City responded that it was not a violation of due process since they gave him a ticket stating he needed to move his car or it would be towed and that all cars in the city must be moved every 72-hours, so there is no need for a special sign.  Judge Susan Illston sympathized with Mr. Riley, but ruled for the city.


Significantly, the Court noted that one form of notice that might have been sufficient would have been to place a ticket on the car’s windshield prior to its being towed. This is essentially what occurred here, except that plaintiff was not ticketed or fined immediately, but instead– and more generously – was warned of the imposition of a fine and the risk of towing if he did not move his car to comply with the 72-hour requirement.

She granted the city's motion for summary judgment.
Posted by Unknown at 1:58 AM