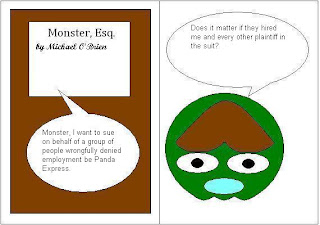 Several Northern California Judges have recently rule in labor and employment cases, among them:

De Los Santos v. Panda Express is a class action employment discrimination suit under Title VII of the Civil Rights Act of 1964 and the California Fair Employment and Housing Act (FEHA).  The complaint alleges that a class of employees were hired into entry level positions and not promoted because Panda Express has a policy and practice of discriminating against non-Asians.  Presently before Judge Saundra Brown Armstrong is the defendant's motion to dismiss certain claims.  At issue are two kinds of claims: 1) a failure to hire non-Asians for managerial positions and 2) a failure to promote non-Asians to managerial positions.  Regarding the failure to hire, Panda Express argues that none of the plaintiffs were applicants that it failed to hire and therefore, they lack standing to pursue this claim.  Judge Armstrong agreed:


Plaintiffs acknowledge that none of them were "applicants," but instead, insist that their claim is in reality "a claim that Defendants fail to hire non-Asian employees directly into managerial positions." [T]hat is not alleged in the FAC.  But even if it were, Plaintiffs miss the point.  Since none of them were applicants who were not hired for a managerial position, they lack standing to bring such a claim.

However, the failure to promote claims faired better.  Here, Panda Express argued that since the plaintiffs only sought promotion to shift lead, they lacked standing to claim they were not promoted to a different position.  Judge Armstrong seemed to allude that this was an issue for summary judgment.


Defendants fail to cite any decisional authority to support the proposition that a plaintiff has standing to assert a failure to promote claim only as to the particular position for which he or she sought a promotion.

She granted the motion to dismiss in part and denied it in part.

Board of Trustees of the Sheet Metal Workers Health Care Plan of Northern California v. Clifton Enterprises is a collection matter under the Employee Retirement Income Savings Act of 1974 (ERISA). The Board claims that Clifton failed to adequately contribute $105,386 to health, welfare and pension benefits provided by the board to employees covered under a collective bargaining agreement (CBA).  It also seeks attorney's fees and costs.  Judge Richard Seeborg noted this all seemed reasonable:


A review of plaintiffs’ legal arguments and the factual record supports plaintiffs’ assertion that no triable issues of material fact exist. Defendant’s failure to supply any factual or legal arguments whatsoever further supports this finding. Accordingly, plaintiffs’ motion for summary judgment seeking relief in the form of $133,194.12 must be granted.