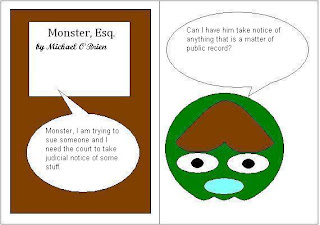 Rodriguez v. Astrue is an appeal of the denial of SSDI benefits.  In this somewhat unusual case, there is no dispute that Mr. Rodriguez has schizophrenia which prohibits him from working.  Rather, the commissioner stated that Mr. Rodriguez is ineligible for benefits because he was not receiving benefits since August 22, 1996 and "permanently residing in the United States under color of law ('PRUCOL')." The ALJ found that Mr. Rodriguez was not PRUCOL because he was a deportee, but as Judge Maxine M. Chesney noted, it isn't that simple.


Further, the ALJ did not address the applicability of [20 C.F.R.] § 416.1618(b)(17), which provides that an alien is PRUCOL if he is "living in the United States with the knowledge and permission of the Immigration and NaturalizationService and whose departure that agency does not contemplate enforcing."

[T]he repeated findings by the Attorney General that Rodriguez is entitled to a work authorization card suggest the United States does not contemplate enforcing Rodriguez’s departure, due to a refusal by Cuba and all other relevant countries to receive him.

She granted Mr. Rodriguez's motion for summary judgment and remanded the matter to the SSA.

Scott v. Unum Life Insurance Company is suit for denial of disability insurance benefits under a breach of contract theory.  At issue is whether putting someone through the rigmarole of repeatedly asking for a claim payment can make an insurance company liable for punitive damages by producing a quantum of evidence as to oppression, fraud or malice.  Judge Saundra Brown Armstrong ruled that it did not in this particular circumstance,

Pham v. Bank of America is a mortgage fraud action arising out of $600,000 home loan in 2004.  Mr. Pham made two pro se complaints before retaining counsel.  Bank of America moved to dismiss the first amended complaint.  Mr. Pham's new attorney stated the complaint should be dismissed, but with leave to amend.  Magistrate Harold Lloyd granted both the motion to dismiss and the request to amend.  The interesting issue related to judicial notice.


The Adjustable Rate Note is not in the public record, though, and may not be judicially noticed. Defendants cite to the Ninth Circuit case Branch v. Tunnell for the rule that while a court generally may not consider matters beyond the pleadings on a Rule 12(b)(6) motion, "a document is not ‘outside’ the complaint if the complaint specifically refers to the document and if its authenticity is not questioned.” [] (9th Cir.1994), overruled on other grounds by Galbraith v. County of Santa Clara, (9th Cir. 2002). But while Branch is good law on this point, it does not provide an independent basis for judicial notice. Thus, because the authenticity of this document is not questioned, the Court will consider it for purposes of Defendants’ motion to dismiss but will deny Defendants’ request for the Court to take judicial notice of it. See Curcio v. Wachovia Mortg. Corp., (S.D. Cal. July 19, 2010) (denying defendants’ request to take judicial notice of documents under Branch but considering the documents for purposes of a motion to dismiss).