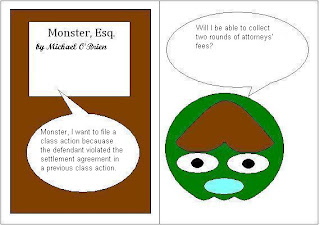 Here are some of the other cases in the U.S. District Court for the Northern District of California:


The SAC omits all of the Carneros’ previously pled state law claims, instead setting forth a single claim for violation of TILA. This claim again suffers from numerous deficiencies. For example, the only allegation asserted with respect to Defendant Real Time is as follows:


II.12. Real Time committed the following violations related to the rescission of the second loan:
II.12.1. Violations of Regulation Z 226.32(e) failed to do research about the second loan being rescinded by Plaintiffs on April 23, 2009, see Exhibit A.

SAC p. 11.  As Real Time points out in its motion, there is no Regulation “Z 226.32(e),” and this conclusory allegation is inadequate to state any kind of claim.

Judge Jeremy Fogel dismissed all claims against all defendants without leave to amend.


Kagan v. Wachovia Securities is breach of contract action for failure to abide by a settlement agreement. The defendants are brokerage firms and the nominee or record owner of Asian Pulp and Paper Co. Ltd. (APP). In 2001 APP was the defendant in a class action securities lawsuit that settled over four years later. The settlement agreement required the Claims Administrator to give nominee owners a request for names and addresses of the purchasers of APP stock. The complaint alleges that this notification never happened and, as a result there are a lot of unpaid claims. The unpaid claimants are suing for breach of contract and the defendants have moved to dismiss stating there is no allegation of a contract. Judge Samuel Conti explained:


The Amended Complaint therefore alleges that a specific term of the brokerage services agreement between Plaintiffs and Defendants required Defendants to provide information pertaining to securities to Plaintiffs, and that Defendants breached this obligation by failing to notify Plaintiffs of the APP settlement. Accepting these factual allegations as true, they are sufficient to nudge Plaintiffs' breach of contract claim across the line from conceivable to plausible.

He denied the motion to dismiss.

This blog has previously covered the saga of Loretz v. Regal Stone, Ltd., which is an action arising from the M/V CoscoBuscan’s allusion with the San Francisco-Oakland Bay Bridge. Presently before the court is the plaintiff’s motion for attorney fees. The total value of the claims presently paid is $1,161,363.43 and it is likely to rise to $1,716,660.83. So what’s that worth? According to Judge Samuel Conti $1,352,528.89.  Neither party requesting fees would put their unredacted billing sheets in the public record, so we are left with the summary.

CPM expended 1268.60 hours in the prosecution and settlement of this case. These hours multiplied by reasonable hour rates result in a requested lodestar of $434,392.50. Having reviewed the time records of CPM in camera, and having considered Defendants' objections, the Court finds that the lodestar should be reduced by $6762.50.20 Therefore, CPM's revised lodestar, based on the Court's determination of reasonable hours and reasonable rates, is $427,630.