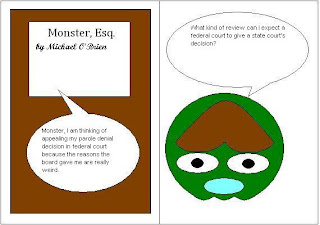 There are a lot of ways to say Happy Valentines Day, like a teddy bear holding a heart, stoning a happy couple, or denying a pile of pending prisoner petitions for habeas corpus.  Judge Claudia Wilken chose the latter.


[A] prisoner can be denied parole if the Board of Parole Hearings (BPH) or governor finds "some evidence of dangerousness" if there is no finding then under Haggard v. Curry (9th Cir. 2010) the case is remanded to BPH to make a finding - the District Court cannot compel the warden to release the prisoner on parole. The "some evidence" standard requires "'something in the prisoner’s pre- or post-incarceration history, or his or her current demeanor and mental state, indicat[ing] that the implications regarding the prisoner’s dangerousness that derive from his or her commission of the commitment offense remain probative to the statutory determination of a continuing threat to public safety.'" Cooke v. Solis, (9th Cir. 2010) (quoting In re Lawrence, (Cal. 2008)).

The question the Ninth Circuit wrestled with in Haggard and Cooke is to what extent federal courts should review state court's application of the California state habeas law. The Supreme Court answered in Swarthout v. Cooke: minimally.  Swarthout dealt with a convicted murder (Elijah Clay) who was denied parole based solely on his commitment offense.  The Supreme Court stated that federal court review was to determine whether BPH followed adequate procedures and not whether the Lawrence some evidence standard was correctly followed.  On January 24, 2011, the Supreme Court denied Mr. Clay's petition.


When, however, a State creates a liberty interest, the Due Process Clause requires fair procedures for its vindication—and federal courts will review the application of those constitutionally required procedures. In the context of parole, we have held that the procedures required are minimal. In Greenholtz [v. Inmates of Neb. Penal and Correctional Complex (U.S. 1979)] , we found that a prisoner subject to a parole statute similar to California's received adequate process when he was allowed an opportunity to be heard and was provided a statement of the reasons why parole was denied.

With that backdrop we turn to the St. Valentine's Day habeas cases:

Wilson v. Curry involved a petitioner that a San Diego County jury convicted of robbery and forcible rape with a deadly weapon who the trial judge later sentenced to an indefinite term.  Mr. Wilson applied for parole in 2008.  He received a hearing where BPH found that his commitment offense was heinous, he had made little progress since entering prison and his psychological results were inconclusive.  Judge Wilken stated that since he had a hearing and an opportunity to present evidence there was no violation of the due process clause.

Evins v. Curry involved a petitioner similarly situated to Mr. Wilson, in that he was sentenced to an indefinite term of 15 years to life.  However Mr. Evins claims that he also had a plea deal violated by his denial of parole.  To show a violation of a plea agreement the petitioner must find a term of the plea agreement that was specifically violated.  General allegations do not suffice.  As Mr. Evins could not point to a particular term Judge Wilken denied his petition.

Augustine v. Ayers involved a petitioner sentenced to 15 years to life for second degree murder.  He claimed the BPH's decision not to parole him was not based on "some evidence" under Lawrence.  As noted above, that is no longer a viable means for review.  Judge Wilken denied the petition.

Woodham v. Hedgpeth involved a petitioner sentenced to 16 years to life for second degree murder.  He complained that his "Maximum parole release date" was in 1999, and that he should  have been paroled a while ago.  It's unclear why he waited ten years to pursue this action.   The California Department of Corrections and Rehabilitation (CDCR) responded that this was the minimum release date and that he was serving an indefinite sentence which is beyond the scope of federal habeas review.  Judge Wilken agreed with CDCR and stated that only minimal procedures in parole hearings are subject to collateral review.
Posted by Unknown at 9:41 PM