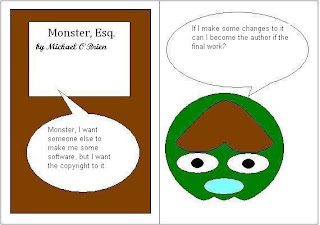 Techsavies v. WDFA Marketing is a copyright infringement lawsuit over "the Collateralizer" which, I think, is some kind of software.  The parties have two motions before Magistrate Bernard Zimmerman.  First, Techsavies wants summary adjudication on the issue of delivery. Second, Techsavies wants summary judgment as to a few defenses.  These motions are notable because Judge Zimmerman denied summary judgment to WDFA a few weeks ago.  Nonetheless, the parties are ready to fight it out again.

Techsavies argues first that WDFA has inadequately pleaded its defenses.  Judge Zimmerman wondered why the plaintiff chose to wait until the last day for dispositive motions to raise, what is in essence, a pleading matter.  He denied the motion and proceeded to consider a motion for summary judgment which raises essentially the same issues.  That motion went no further, other than the Magistrate ruling that Copyright misuse cannot be a defense to breach of contract.  One interesting issue came up with regard to the joint ownership defense.  WDFA argued that it gave HTML code to Techsavies making the programmer a coauthor.  This differs from S.O.S. Inc. v. Payday, Inc. (9th Cir. 1989) where the client gave instructions, but not code to the programmers.  The client in SOS was not a coauthor, but the client here could be.

Judge Zimmerman denied the dispositive motions, setting the case for trial.
Posted by Unknown at 1:32 PM