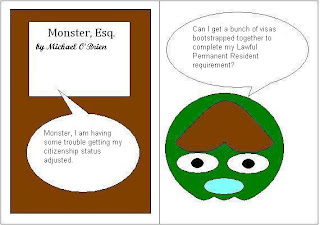 Hamdan Fayad v. Keller is an appeal of an immigration judge's decision denying Mr. Fayad American citizenship because he had not been a lawful permanent resident for an adequate period of time.

Mr. Fayad is a native of Lebanon who entered the United States in December 1998 on an F-1 student visa.  Three months later he married his current wife and sought Lawful Permanent Resident (LPR) status.  The predecessor agency of the U.S. Customs and Immigration Service (USCIS) granted the application conditionally on December 15, 2000.  Hitting a rough spot in his marriage in late 2001, a Santa Clara Judge convicted Mr. Fayad of felony domestic violence, later reducing the conviction to a misdemeanor and then expunging it altogether.  However, on May 19, 2006 USCIS commenced removal proceedings against him as a result of the 2001 domestic violence conviction.  Apparently, Mr. Fayad patched things up with his wife, because she submitted a second request for LPR status which an immigration judge approved on July 2008.  USCIS ceased the removal proceedings and now Mr. Fayad seeks naturalized citizenship claiming that his three year residency clock started to run in December of 2000.  USCIS claims that it began to run in July 2008 and he should apply again in July.  Judge Lucy Koh agreed with the government.


As explicitly enumerated under 8 U.S.C. § 1255(b), the Court finds that Plaintiff’s LPR status began anew on the date that the second visa was issued. Plaintiff may not bootstrap his years of residency through the simultaneous use of two different immigrant visas. See 8 C.F.R.§ 204.2(h)(2) (the grant of a subsequent visa petition to the same petitioner is not a "reaffirmation or reinstatement of the original petition" where [an] immigrant visa has been issued to [the] beneficiary as a result of the petition approval).

Judge Koh granted the government's motion for summary judgment, but noted that Mr. Fayad could file another petition in two weeks which would not be subject to the time barrier.
Posted by Unknown at 2:24 PM