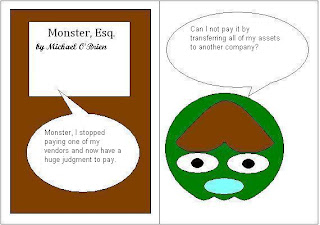 Here are some of the other cases where judges released orders in the U.S. District Court for the Northern District of California.


Plaintiff tacitly concludes that it omitted any reference to Exception 6 in its appeal, but now argues that it was under no obligation to identify the specific FOIA exemption at issue in its administrative appeal. Plaintiff fails to cite any legal authority in support of its argument. Nor would such a rule make any legal sense.

Judge Armstrong granted the motion to dismiss without prejudice to refiling after exhaustion of administrative remedies.

Gonzalez v. USA is a suit for a refund of allegedly illegally assessed taxes.  The plaintiff is the personal representative for the estate of the taxpayer who, in 2000, sold stock resulting in a capital gain of $132,521,496.  That's a pretty good day, but he wanted to defer payment of taxes on the gain.  So he entered into a rather complicated transaction.  Blackvest purchased a bunch of 1985 U.S. Treasury Bonds from Deutsche bank which then sold them back to Blackvest at a future date.  Blackvest sold its interest in this arrangement to the taxpayer for $9.79M in cash and $362 in financing.  The note was secured by the bonds.  the taxpayer then exchanged his interest in the bonds for shares of preferred stock in Bayside valued at a little less than $4M.  This created a capital loss of $142M.  Bayside prepaid the note and sold its interest in the bonds back to Blackvest.

The IRS disregarded the capital loss and demanded $31.5M in taxes.  Plaintiff paid the taxes under protest and now seeks a refund.  Judge Saundra Brown Armstrong explained that the law is pretty simple.  If the taxpayer entered into the transaction for profit then it can be counted as a capital loss.  However, if he entered into it to reduce tax liability then it cannot be counted as a capital loss.  Here, the plaintiff had a tough time making his case.  The taxpayer's account stated that the taxpayer desired to limit his tax liability, his attorney received no substantive response and his financial advisor took his Fifth Amendment privilege against self-incrimination.

Under those facts, Judge Armstrong granted summary judgment for the government.


[The plaintiffs] previously obtained an arbitral judgment in excess of $5 million against Tranax Technologies, Inc. ("Tranax"). Tranax allegedly transferred its business assets to a sister entity, Defendant Hantle USA ("Hantle"), in order to avoid satisfying the judgment. In its First Amended Complaint, Plaintiffs alleges causes of action under California’s Uniform Fraudulent Transfer Act ("UFTA") against Hantle based on its role in the allegedly fraudulent transfer of assets by Tranax, which is now bankrupt.

Judge Saundra Brown Armstrong explained that this is sufficient to show a fraudulent transfer occurred.  Hantle did itself few favors by initiating an advertising campaign saying that Tranax had changed and that "A rose by any other name" was its business conducted by Hantle.  She denied the motion to dismiss
Posted by Unknown at 1:14 AM