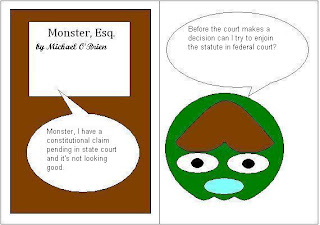 Here are some recent orders from judges in the U.S. District Court for the Northern District of California on civil rights cases.

Buckheit v. Dennis is a case this blog covered before:


[T]he plaintiff called police because his girlfriend attacked him. He claims officers arrested him without probable cause where it was legally impossible for him to be convicted of inflicting an injury upon a co-habitant (he didn't attack anyone). He argues that the city and county have a policy of always arresting males in domestic disturbances regardless of fault. The county responds that it did not hire the officers (the City of Atherton did) and it had no responsibility for them.

This claim is going to trial.  Perhaps remarkably, Mr. Buckheit carries no ill will toward Atherton, in fact, he applied to be on the town's finance committee.  Jerry Carlson was on the Atherton Town Council and allegedly retaliated against Mr. Buckheit by preventing him from joining the finance committee because he exercised his First Amendment right to address grievances with the lawsuit above.  Magistrate Joseph C. Spero explained:


In order to state a First Amendment retaliation claim, a plaintiff must show: "(1) that the plaintiff 'was engaged in constitutionally protected activity'; (2) that the defendant’s actions caused the plaintiff 'to suffer an injury that would chill a person of ordinary firmness fromcontinuing to engage in that activity'; and (3) that the 'defendant's adverse action was substantially motivated as a response to the plaintiff’s exercise of constitutionally protected conduct.'" Worrell v. Henry, (10th Cir. 2000) (citing Mendocino Environment[al] [sic] Center v. Mendocino County, (9th Cir. 1999).

This case rises and falls on whether there is admissible evidence of a retaliatory motive.

Here, I wonder, why didn't the Mr. Buckheit just get an affidavit from Councilman Dobbie about the conversation with Councilman Carlson, or, failing that, depose him.  That would pretty much resolve everything since Councilman Carlson's statement is an admission by a party opponent.  However, since the plaintiff chose this alternate route a hearsay exception must apply to the statement from Councilman Dobbie to Mr. Buckheit.  None existed and Judge Spero granted partial summary judgment on this count.

Phillips v. San Francisco is a pro se plaintiff's police brutality claim now facing a motion for summary judgment.  Yesterday this blog noted, how a pro se litigant with very similar facts escaped summary judgment with an excellent recitation of the facts of his case.  Today is a different matter entirely.  The case rose and fell on whether the officers acted reasonably:


Defendants’ evidence shows that defendant officers responded to a 911 call stating that anindividual male was shouting obscenities and disturbing the peace in the vicinity of the laundromat. Defendants’ evidence also shows that plaintiff appeared to be under the influence of alcohol and was yelling obscenities bothinside the laundromat and outside on the adjacent sidewalk. Once SFPD arrived on the scene, the officers spoke with plaintiff and asked him to leave. Plaintiff was non-compliant and appeared "aggressive" and "drunk." Subsequently, plaintiff became "loud," "abusive" and "aggressive" toward the officers. Officer Balingit testified that plaintiff was "yelling and waiving [sic] his arms" and acting "irrational[ly] and aggressive[ly]," giving the appearance of being "under the influence of alcohol ordrugs [and having] an altered mental state." Defendants’ evidence shows thatafter refusing to leave the premises, plaintiff resisted arrest, requiring Balingit and Masilang, and ultimately several other officers as well as paramedics, to wrestle with plaintiff until he was sufficiently subdued for transport via ambulance to SFGH.

Mr. Phillips problem here is that he failed to contest this evidence.  As a result Judge Marilyn Hall Patel found that the officers had established qualified immunity and granted summary judgment for the defendants.

San Jose Entertainment Group, Inc. v. City of San Jose is the latest chapter in Attorney George Mull's effort to get San Jose City Ordinance 6.60.40 declared unconstitutional.  Basically, the ordinance requires live entertainment venues to get a permit.  Mr. Mull argues that this is a prior restraint of free speech and is unconstitutional as such he requests a preliminary injunction. Judge James Ware is not convinced standing exists let alone a showing of irreparable harm:


Here, Plaintiff contends that irreparable harm would ensue from the enforcement of the challenged ordinance in that it would be unable to hold an event celebrating Black History Month with a karaoke party at the Cuetopia establishment, which does not possess the required license. As Cuetopia is not a plaintiff in this action and would be the party against whichthe ordinance is enforced, the Court finds that these allegations are insufficient to support standing for Plaintiff.


Plaintiff contends in its Reply that the establishment it intends to purchase is the WET Nightclub, which is the subject of litigation and a potential injunction in state court. Counsel in this case also represents WET Investments, Inc. and has previously brought an action for an injunction against this ordinance, C 09-04631 JW, which the Court denied on Younger abstention grounds.

Younger v. Harris (U.S. 1971) held " the normal thing to do when federal courts are asked to enjoin pending proceedings in state courts is not to issue such injunctions."  Judge Ware noted that this could be a problem down the road for the plaintiff.
Posted by Unknown at 11:05 PM