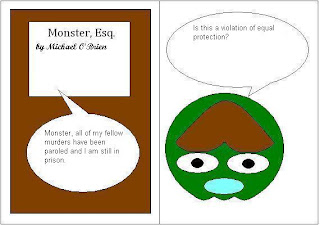 Crawford v. Hedgepeth is a pro se prisoner petition for habeas corpus.  A jury in Almeda County convicted Mr. Crawford of first degree murder and the trial court sentenced him to an indefinite term of 26 years in prison.  Upon appeal, the California Court of Appeal found the evidence insufficient and reduced his conviction to second degree murder (16 years to life in prison).  He now collaterally attacks the conviction stating that his right to confront a witness was infringed upon when the trial judge limited cross examination about some prior inconsistent statements.  Judge Claudia Wilken disagreed:


Even assuming that Petitioner’s right to confrontation and cross-examination was violated, he is not entitled to federal habeas relief unless the error had a "'substantial and injurious effect or influence in determining the jury's verdict.'" Holley v. Yarborough (9th Cir. 2009).
[However]
A review of the record shows that even if Petitioner had been able to cross-examine Bain with regard to those two incidents, it would not have had a substantial effect on the verdict.

Oluwa v. Evans is also a petition for habeas corpus based on a denial of parole.  Interestingly, Mr. Oluwa claims that he was not released in violation of the Equal Protection Clause of the 14th Amendment (EPC).  He argues that dozens of murders have been paroled that were incarcerated after him and that the decision not to parole him violates EPC.  Judge Maxine M. Chesney disagreed:


Petitioner must show he is a member of a class that was denied a benefitavailable to other similarly situated individuals, and that such denial was not rationally related to legitimate state interests. See Mayner v. Callahan,  (9th Cir.1989) (applying rational basis test to prisoner’s claim of unequal application of parole consideration criteria).  All inmates applying for parole are not similarly situated. See Houtz v. Deland,  (D. Utah 1989) (citing Sweazea v. Missouri Bd. of Probation & Parole,  (8th Cir. 1984) (per curiam)). Rather, parole decisions, by their very nature, require a parole board to look at the individual circumstances of each prisonerand his crimes.

Judge Chesney noted that there was not a similarly situated inmate and therefore no denial of equal protection.  She denied the petition for habeas corpus.

In re McCabe is an extradition request of Patrick McCabe (a former priest) from the United States to the Republic of Ireland for face charges of indecent assault upon a minor.  The history of the case is rather elaborate, but basically Mr. McCabe was a priest who allegedly assaulted a six boys between 1975 and 1981.  He made plenty of incriminating statements to Irish authorities that I am not going to republish here.  Mr. McCabe argued that he should not be extradited because the crimes he is accused of committing would not be criminal in the United States since the statue of limitations would have run... a while ago.  Magistrate Nandor Vadas explains that the statute of limitations is a defense, but it does not factor in to the extradition calculation citing Kamrin v. United States (9th Cir. 1984).

Judge Vadas explained that the United States and Ireland did not desire for the statute of limitations in the Untied States to apply.

Therefore he granted the certificate of extradition.

Lamas v. Litton Loan Service is a very rare mortgage contest where the homeowner is not fighting foreclosure and would like to seek money damages in state court.  When Litton tried to remove the case to federal court Lamas sought remand as Magistrate Timothy J. Bommer explains:


After carefully considering the foregoing arguments and thoroughly reviewing the evidence Defendant has submitted, the Court finds that Defendant has failed to meet its burden of establishing that the amount in controversy exceeds $75,000.

Judge Bommer agreed with those authorities and granted remand.
Posted by Unknown at 9:47 PM