Two judges in the U.S. District Court for the Northern District of California recently released orders in mortgage cases.

Ancheta v. Golden Empire Mortgage, Inc. is a pro se plaintiff's effort to undo the foreclosure sale of his house in San Jose.  Judge Lucy H. Koh notes that the complaint is rather difficult to understand. 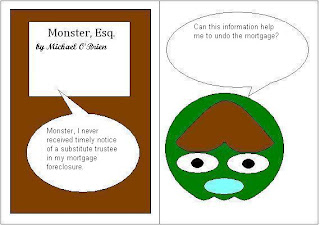 So, things are not looking good for Mr. Ancheta. Judge Koh found that his claims under the Truth in Lending Act, the Fair and Accurate Credit Transaction Act, and the Real Estate Settlement Procedures Act were time barred. Judge Koh partially dismissed he complaint with prejudice and partially dismissed it with leave to amend. She only considered the ten federal claims.

Atienza v. Wells Fargo Bank is another pro se plaintiff's effort to undo a mortgage foreclosure, here they argue they were not given adequate notice of the substitute trustee.  They argue that a statute gives Wells Fargo an obligation to inform them of this change, and it's failure to do so is either negligence per se or a violation of California's Unfair Competition Law (UCL).  That seems clever, but Judge Richard Seeborg thought otherwise.


While a statutory violation may constitute evidence of a breach of due care, a plaintiff alleging negligence per se still must aver injury proximately caused by the violation.[] Despite being granted leave to amend, plaintiffs have added no allegations that defendants’ purported statutory violations, as opposed to the potential foreclosure itself, is the cause of any injury.

In its prior Order, the Court dismissed this claimwith leave to amend. It specifically instructed plaintiffs that “in order to state a UCL claim, theymust include allegations of loss of money or property caused by the unfair practice itself.” Plaintiffs’ statement of their claim in the SAC, however, is essentially identical to the one previously dismissed.

He dismissed the complaint without leave to amend.
Posted by Unknown at 2:25 PM