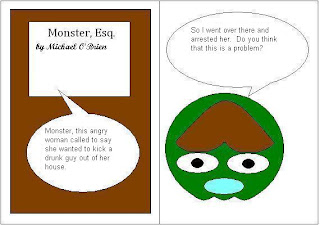 Here are some of the latest orders on motions for summary judgment in civil rights cases under 42 U.S.C. § 1983.

Hernandez v. City of Napa is a false arrest case. Ms. Fernandez came back from work one night to find her drunken on/off boyfriend (Donald Green) standing in her living room cutting himself with scissors. She became enraged and told him to leave. Evidently, this didn't work so she tried to beat him up. That also didn't work so she called the police to kick him out. In a moment of irony, the police arrested her for domestic violence. The City dropped the charges and Ms. Fernandez sued for false arrest stating that the evidence overwhelmingly showed that Mr. Green was the "dominant aggressor" and should have been arrested, not her. Magistrate Elizabeth D. Laporte found this to be a close call:


Despite all of this,Officer Bender did not consider whether Mr. Green was a trespasser, whether Plaintiff had exercised her right to evict a trespasser, or whether she had acted in self-defense as required by the Penal Code. While Defendants argue that it was reasonable for Officer Bender to conclude that Mr.Green entered Plaintiff’s house with permission before the fight started, a reasonable juror could also conclude that he did not make a reasonable effort to determine who was the dominant aggressor, especially in failing to consider self-defense or trespass.

She denied the motion for summary judgment putting the case on the path to trial.

Nava v. City of Santa Clara is also a false arrest case.  Here, the City believed that Ms. Nava was involved in some criminal activity outside of a bank.  Officers pulled her from the car, handcuffed her, put her in the back of a police car and detained her for fifteen minutes with multiple guns pointed at her away from her four-year-old grandson.  Their defense is that this was an investigatory stop and not an arrest.  Magistrate Paul S. Grewal didn't buy it.


[With regard to whether there was an arrest]

Because Defendants have not asserted, much less established, that there was probable cause to support an arrest of Plaintiff, a reasonable jury’s conclusion that Plaintiff was arrested necessarily means that summary judgment in Defendants’ favor is not warranted.
He denied the motion for summary judgment.

[With regard to whether there was an investigatory stop]

A reasonable jury could find that Defendants did not have any reason to believe Plaintiff was armed and dangerous or posed any threat to any of the dozens of officers present. Such a jury could particularly rely on the fact that after Defendants ordered Plaintiff from her car at gunpoint and "cleared" her vehicle, there is no evidence that Plaintiff behaved in a confrontational manner either before or during her detention.

He denied the motion for summary judgment.

Cruz Dominguez v. California Department of Corrections and Rehabilitation (CDCR) is a wrongful death case.  Scott A. Fitzgerald was a brittle diabetic who died on September 12, 2006 of an acute diabetic coma while in San Quentin State Prison.  His son, though his guardian ad litem, claim that this was a result of the doctors' deliberate indifference to Mr. Fitzgerald's serious medical needs in violation of the Eight Amendment. The doctors respond that they were not the treating physicians and therefore cannot be held liable for Mr. Fitzgerald's death.  Magistrate James Larson saw things differently:

He denied the motion for summary judgment.


Here, plaintiff alleged that defendant Caropreso used excessive force against him without provocation, that Caropreso acted in retaliation for plaintiff’s having filed a lawsuit against him and having complained about him in grievances, and that the other defendants caused him to be placed in administrative segregation in retaliation for his lawsuits and grievances. Assuming the truth of these allegations, as the Court instructed in Crawford-El [v. Britton (U.S. 1998)], it seems extremely doubtful that reasonable persons in defendants’ positions could have believed that such conduct was lawful.

She denied the motion for summary judgment.
Posted by Unknown at 2:15 PM