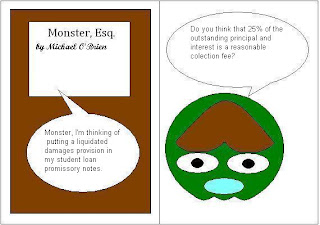 We start the day with two lending cases from the U.S. District Court from the Northern District of California.

Aniel v. Litten Loan Service is the fifth  mortgage fraud case brought by the plaintiffs over the foreclosure of their property in San Bruno, California.  The Aniels executed a promissory note for $715,000 in exchange for a deed of trust on their property. They allege this transaction was overcome by problems in violation of the Fair Debt Collection Practices Act (FDCPA) and the Real Estate Settlement Procedures Act (RESPA). The complaint is plagued by a few problems: first, FDCPA does not apply to non-judicial foreclosures in the Northern District of California. Second, if it did it only applies to property used for family purposes and the Aniels used the property for rental purposes.

The RESPA claim deals with the banks failure to respond to a qualified written request (QWR). A QWR is a statement that states that an account is in error and gives the lender 60 business days to remedy the situation. Here the letter the plaintiffs sent is more in line with a cease and desist letter which is unprotected.

Judge Saundra Brown Armstrong dismissed the federal claims and remanded the others to state court.

Bottoni v. Sallie Mae is a class action predatory lending case involving private student loan taken by the class from the defendant for the purpose of attending California Culinary Academy.  The class members defaulted on their loans and Sallie Mae imposed a collection fee of 25% of the outstanding principal and interest regardless of the actual costs incurred.  Apparently culinary school, despite being only 16 months long, is expensive.  In addition to federal loans the lead class members took out $40-$80k of private loans, with costs they ended up owing over $100k.  Sally Mae admitted that the 25% clause was a liquidated damages provision, the question is what provision of the liquidated damages statue is involved.  Maagistrate Laurel Beeler explained:


What Hitz [v. First Interstate Bank (Cal. App. 1995)]suggests is that credit card users might enjoy services that render their contracts “consumer contracts,” at least for purposes of section 1671(c). Similarly, when the action challenged is a financial service, not the extension of credit, it is a service under the Consumer Legal Remedies Act (and by analogy, might render the contract a section 1671(c)consumer contract). [T]he extension of credit alone is not a “service” under the authority that the parties cited, and Plaintiffs have not pled facts that student loans are different than mere extensions of credit.

She granted the denied in part, and granted in part the motion to dismiss with leave to amend.
Posted by Unknown at 1:50 PM