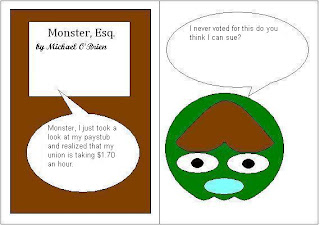 Here are some recent labor cases in the U.S. District Court for the Northern District of California.

Corns v. Laborers International Union of North America (LIUNA) is a labor case where the plaintiff claims that the union raised his fees and dues without a secret ballet in violation of the § 101(a)(3) of the Labor Management Reporting and Disclosure Act (LMRDA).  At a national convenction LIUNA approved a fee of $0.25 per hour worked.  Mr. Corns paid $1.70 in fees and organizing expenses for each hour worked.  However, his problem on his motion for summary judgment is that the law does not requires a secret ballet for international unions (like LIUNA).  Further, the fees were approved by the local union under a predecessor agreement.  Judge Marilyn Hall Patel granted summary judgment for LIUNA.

Martinez v. Antique & Salvage Liquidators, Inc. is a wage and hour dispute that previously had faced a motion for summary judgment which Magistrate Harold R. Lloyd is now reconsidering.

This is a typical wage and hour dispute: the plaintiffs claim that their employer denied them breaks which means a denial of overtime pay which leads to false pay statements and amounts to seven causes of action under California and Federal labor laws. One of the defendants claims that none of this matters because it is not the plaintiffs' employer.  Magistrate Harold R. Lloyd denied this originally stating that the bosses' single inquiry one day into the employees' status was enough to create a triable issue of fact.  Choosing a catwalk over dental floss, the plaintiffs reminded the court that under the Private Attorney General Act (PAGA) anyone may sue to enforce the labor code by anyone who has violated it even if the violator is not the employer.  Judge Lloyd agreed.