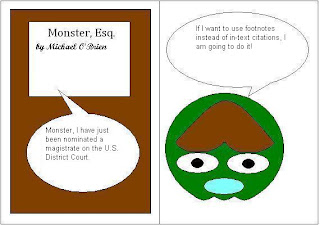 Quinto v. JP Morgan Chase Bank is the rare case where a bank has modified a debtor's loan balance and interest rate, about which the debtor is claiming the original transaction was fraudulently obtained.
In exchange for this modification, Plaintiff agreed to pay the amount she owed under the agreement and warranted that the original note "is valid and enforceable in all respects and is not subject to any claims, defenses or right of offset or credit except as herein specifically provided."
Waiver is a pretty good defense, and Judge Jeremy Fogel wrote that it will probably carry the day, but he gave Ms. Quinto a chance to amend anyway.
Sencion v. Saxon Mortgage Services is also a mortgage fraud complaint where the plaintiff obtained a modification.  Here, instead of allowing the plaintiff to pay the new mortgage, Saxon foreclosed on the property and sold it off anyway.  After a few rounds of pleading, the First Amended Complaint survived a motion to dismiss, now Mr. Sencion would like to file a Second Amended Complaint and add a few more causes of action into the fray before discovery begins.
The big one is that Mr. Sencion wants to add a claim for a violation of California's Unfair Competition Law (UCL) against Deutsche Bank (for whom Saxon worked) presumably to get damages from another source.  However, Magistrate Paul S. Grewal noted that UCL cannot lie based on a theory of vicarious liability.  However he allowed claims of negligence and declaratory relief to go forward.
Judge Grewal granted in part and denied in part the motion to dismiss.
Interestingly (at least to me), Judge Grewal put all of his citations in footnotes as opposed to the rest of the District judges who use citations in text.
Posted by Unknown at 10:11 PM