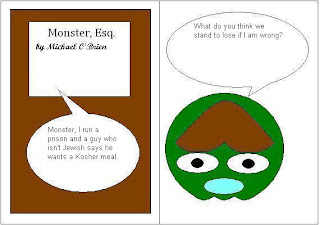 Here are some of the other cases going on in the U.S. District Court for the Northern District of California.

How much is a kosher meal worth?  This isn't a joke, just think of a number in your head.  Robinson v. Delgado started as a pro se prisoner civil rights action under 42 U.S.C. § 1983.  Mr. Robinson is a prisoner at Salinas Valley State Prison.  During his incarceration, his converted to some non-Jewish religion and requested a kosher meal.  The prison staff and warden denied the request because he did not believe that Mr. Robinson was really in need of it.  After a couple other incidents, Mr. Robinson sued 92 defendants under 11 causes of action.  Magistrate Nandor J. Vadas, appointed Cooley LLP as counsel for the plaintiff and at trial an Eighth Amendment excessive force and a First Amendment free exercise claim remained.  Cooley spent an incredible amount of effort on this case which culminated in a five-day trial.

Cooley prevailed and obtained a permanent injunction against Matthew Cate, the Secretary of the California Department of Corrections and Rehabilitation requiring him to give Mr. Robinson a kosher meal.  Cooley then sought attorney's fees... $435,819.00 in attorney's fees.  The Defendant's responded by stating that the maximum lodestar for this kind of case is much lower, to the tune of $220,791.00.  Judge Vadas granted the latter amount along with $47,482.62 in costs.  Making the denial of a kosher meal worth $268,273.62.

This blog has covered Center for Food Safety v. Vilsack before here and here.  The case made headlines when Judge Jeffery S. White entering a preliminary injunction forbidding the future planting of genetically modified sugar beets. While the preliminary injunction was on appeal the plaintiffs sought to modify the complaint which is the matter presently before the Court.  The Ninth Circuit stayed Judge White's preliminary injunction while on appeal and, in the meantime, the Secretary conducted a new environmental assessment (EA) and released another finding of no significant impact (FONSI).  Now, the plaintiffs seek to enjoin the latter under NEPA.  However, the intervenor-defendants have already filed a declaratory judgment action seeking the order's validity in the U.S. District Court for the District of Columbia.

Judge White ruled that D.C. was where the fight was going to be and that judicial economy would not be served by examining the Secretary's second order.

Northstar Financial Advisors v. Schwab Investments is mutual fund breach of fiduciary duty case.  The plaintiffs claim that the defendants issued a prospectus that stated the Schwab Total Bond market Fund would track the Lehman Brothers U.S. Aggregate Bond Index.  Instead, the fund invested heavily in collateralized mortgage obligations (CMOs) which were not part of the index and a lot more risky.  The index had a return of 5.92% for the same period the fund lost 1.09% resulting in the current lawsuit.

At issue is whether the Securities Litigation Uniform Standards Act of 1998 (SLUSA) preempts this litigation.  SLUSA preempts class actions brought by more than 50 people based on state law the either 1) allege a misrepresentation of a material fact in connection with the purchase or sale of a covered security; or 2) that the defendant used or employed any manipulative or deceptive device or contrivance in connection with the the purchase or sale of a covered security.  These claims must be brought under either §§ 12(b) or 14 of the Securities Act respectively.

Judge Lucy H. Koh, found that the claims were, as presently presented, preempted:

She granted the motion to dismiss with leave to amend.
Posted by Unknown at 11:30 PM