A couple days ago this blog wrote about the "Pie Case" where a civil servant was admittedly insubordinate, repeatedly late, retained in her position and sued her employer.  That level of excitement may not be replicated for a while, but here are some other orders in cases under Title VII of the Civil Rights Act. 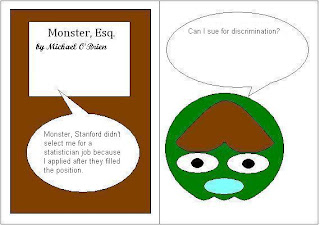 Lawler v. Montblanc North America involves an employee who injured herself, then broke her foot and was declared by her physician unable to work.  Her employer fired her from her mall store manager position and she sued under California's Fair Employment and Housing Act for disability discrimination.  Disability discrimination requires the plaintiff to show that she was qualified to do the job.  Here, Ms. Lawler's claim failed.  As Judge Lucy H. Koh explains:


Plaintiff has introduced no evidence that she could work at all after August 2009, let alone work the in-store hours necessary for that of a Boutique Manager. In fact, the only evidence in the record is that Plaintiff has been completely unable to work due to her chronic arthritic medical condition, and hasreceived disability benefits because of her inability to work.
See id. at 33-35.

In sum, Plaintiff has introduced no evidence that she was qualified to perform the essential functions of the position for which she was terminated, and thus failed to make a prima facie disability discrimination claim. Accordingly, Defendants are entitled to summary judgment on Plaintiff’s first cause of action.

Judge Koh granted summary judgment on the other related claims as well.

Hseih v. Stanford University involves a statistician who was rejected from three jobs with the Department of Veterans Affairs (VA), three others at Stanford University and one joint position.  He claims that the reason he was rejected was discriminatory, the University believes otherwise.  Proving that a discriminatory reason existed is rather difficult since employer's do not tend to document their prejudices.  Mr. Hseih's speculation to the contrary was unavailing to Magistrate Harold R. Lloyd:


Hsieh's claims of discrimination are unpersuasive. He says that the VA's and Stanford's prior identification of a candidate before the VA position was posted violated VA policy and thus demonstrates discriminatory intent, but he does not cite any such policy nor explain how this was discriminatory. In fact, the evidence submitted suggests that listing Lu as a "name request" was perfectly acceptable. Hsieh also says that nothing in the postings for the position explained that an applicant had to apply to both the VA and Stanford, but this does not prove anything since Hsieh failed to timely apply to either of them. The fact is that Lu had already been selected by the time Hsieh applied.

He granted summary judgment on all claims for the defendants.
Posted by Unknown at 1:44 AM