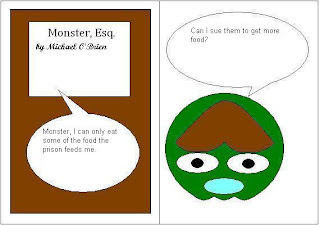 Two judges in the Northern District of California recently released several orders in cases brought by prisoners under 42 U.S.C. § 1983.  Among them:

Douglas v. Banks is a pair of pro se prisoner's civil rights complaint under 42 U.S.C. § 1983.  In the first suit Mr. Douglas sues various officials at San Quentin State Prison (SQSP) for failing to provide him with a protein substitute for nuts and fish to which he is allergic.  The second suit involves similar claims against defendants at Salinas Valley State Prison (SVSP).  The two prisons took slightly different tactics to defending the suit.  SQSP argued that Mr. Douglas failed to exhaust his administrative remedies because he had not yet appealed to the director's level of review when he filed the complaint.  Judge Lucy Koh explained that he didn't need to:


However, Plaintiff was granted relief in both his first and second levels of review. "An inmate has no obligation to appeal from a grant of relief, or a partial grant that satisfies him, in order to exhaust his administrative remedies." Harvey v. Jordan, (9th Cir.2010).

Judge Koh denied the motion to dismiss.  However, this victory may be temporary because Judge Koh, citing Davies v. Low (E.D. Cal. 2006) found that the meals, even with the dietary restrictions ignored, were adequate.


Defendants presented evidence that the Estimated Nutrient Need for an active male was2400 calories and 66 grams of protein. (Opp., Ex. C-02 (July 28, 2010 Director’s Level of Review); Decl. Watson at ¶ 6.) The caloric intake of meals in general was 2900-3200 per day. (Opp., Ex. C-02 (July 28, 2010 Director’s Level of Review).) Even avoiding fish and nutproducts, the SVSP menu averages the minimum requirements. (Decl. Watson at ¶ 6.) Moreover, each meal generally contained an extra 300-400 calories so that an inmate who chosenot to eat a particular item may still obtain adequate nutrition. (Opp., Ex. C-12 (Standard/Special Diets for CA Prison Health Care Services)).

Harris v. Lake County Jail is another pro se prisoner's civil rights complaint under  42 U.S.C. § 1983 where the plaintiff argues that prison officials were deliberately indifferent to his serious medical needs. Mr. Harris complains that he is unable to move in his cell because he is in need of medical marijuana for his lower back pain and has been given a "lifetime prescription" from the Richmond Health Center for cannibus.  Judge Susan Illston doesn't buy it:


Medical defendants also point out that Harris had no current prescription nor valid recommendation for the use of medical marijuana at the time of his incarceration in 2009. (Med.Defs.’ Mot. for Summ. J. at 12.) While Harris claims to have a "lifetime" prescription (FAC at 3, 5), he provides no evidence. Indeed, as medical defendants point out, jail medical staff senta request for Harris’ records to the Richmond Health Center, which Harris indicated was the source of his prescription. (Decl. Stottsberry at ¶ B; id., Ex. A at 090-094.) The records received in response do not support Harris’ claim for a valid prescription. (Id.) The clinic did not give a diagnosis and did not provide Harris with a medical marijuana recommendation. (Id.) To the contrary, records of Harris’ contact with the clinic in 2007 show that he threatened legal action for their failure to provide verification of a lifetime recommendation. (Id. at 090.) Furthermore, medical defendants point out that California’s Compassionate Use Act disallows prescriptions for lifetime use and instead requires annual, updated documentation for the authorized use of prescription marijuana.

She granted the defendant's motion for summary judgment.

Marquez v. Wilson is  another pro se prisoner's civil rights complaint under  42 U.S.C. § 1983 where the plaintiff argues that the defendants placed him in administrative segregation in retaliation for his various complaints against the prison in violation of his First Amendment right to petition the government.  Judge Lucy H. Koh explains, the allegations fell short of creating an issue for trial:


Plaintiff also argues that Defendants’ assertion that his behavior had the potential of leading to disturbances and unrest was not persuasive because during the disciplinary hearing, Officer Craig noted that "although [Plaintiff] has some history of disruption it was not dangerous behavior." (Opp. at 10.) However, this statement tends to support rather than contradict Defendants’ decision to place Plaintiff in administrative segregation. The criteria for placement into administrative segregation is not that an inmate must show dangerous behavior, but only that there should be a determination that an inmate was prone to "disrupt the operations of the jail, or are likely to need protection from other inmates." (Decl. Wilson, Ex. G.) Defendants have proffered evidence that satisfied both criteria.

Judge Koh granted summary judgment for the defendants.
Posted by Unknown at 6:03 PM