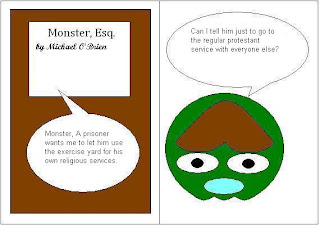 On May 4, Judge Ronald M. Whyte largely denied a motion for judgment by various official at Salinas Valley State Prison in a case about an inmate's claim for religious freedom.

According to court documents, Richard B. Hall has been banned from the prison chapel at Salinas Valley State Prison.  He claims that Chaplain J. Young failed to accommodate his Reformed Christian or Calvinist beliefs, instead he is compelled to attend protestant services that harbor beliefs abhorrent to his own.  He offers as proof, a letter from his home church pastor who explains how the beliefs of his home church differ from that of Chaplain Young.  The prison countered with an affidavit from the chaplain who said that he offered individual weekly bible studies to accommodate every possible protestant prisoner belief.  However, Mr. Hall came back with an affidavit from another inmate who stated that he had attended protestant services for over a decade, has been involved with the chapel, and never heard of such a thing being offered.

Judge Whyte explained that under the Religious Land Use and Institutionalized Persons Act (RLUIPA) state prisons face liability when they "impose a substantial burden on the religious exercise of a person" unless they can demonstrate that the program furthers a compelling governmental interest and is the least restrictive means of furthering that compelling governmental interest.  Here, the prison argued that Mr. Hall has "confidential enemies" that require him to be in a high security wing.  Judge Whyte said that wasn't good enough:


Plaintiff states that SVSP’s Reformed Christians "offered to meet on the yard under the supervision of yard officers - and the officer in tower - . . . [or] whatever is the least amount of strain on [the] existing program."(Compl. at 26.) Defendants offer no evidence to show that this cannot be accommodated. Furthermore, that inmates may be segregated from other prisoners either for their own protection or for disciplinary reasons does not deprive them of their right to free exercise, e.g. to attend religious services. See Beck v. Lynaugh,  (5th Cir. 1988); Mawhinney v. Henderson, (2d Cir. 1976); see also Whitney v. Brown, (6th Cir. 1989) (where security concerns regarding movement of inmates are manageable, prison administrators may be required to allow inmates from all areas of institution to gather together for services).

Judge Whyte largely denied the motion for summary judgment.  This case raises the interesting question of just how far must a prison go to accommodate prisoner beliefs under RLUIPA.
Posted by Unknown at 4:32 PM