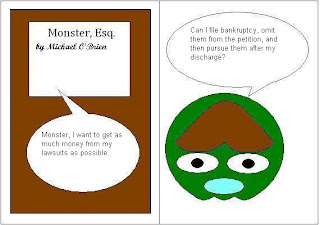 Yoshimoto v. O'Reilly Automotive, Inc. is a routine employment discrimination case with a procedural twist.  When Mr. Yoshimoto declared Chapter Seven bankruptcy he failed to include his employment discrimination claims as assets in his schedule.  He subsequently reopened the bankruptcy, added the claims and worked out an agreement on proceed splitting with the trustee.  O'Reilly now argues that the failure to disclose the claims judicially estopps Magistrate Laurel Beeler from now considering them. Funtanilla v. Swedish Hospital Health Services (W.D. Wash. 2011) explains that the Ninth Circuit rigorously enforces this rule,


Courts have, therefore, imposed judicial estoppel even where a discharge is later vacated, [Hamilton v. State Farm Fire & Cas. Co., (9th Cir. 2001)], and even where the debtor has offered to reopen his or her bankruptcy case and amend his or her petition, id.

Nonetheless, the precedent on this matter is anything but clear, as Judge Beeler explains.


On the other hand, the Ninth Circuit affirmed a district court’s application of judicial estoppel ina similar case where the district court determined that “the Court’s interest in protecting the judicial system outweighs the interest of plaintiff's creditors or the value of preventing a windfall to defendants.” Laisure-Radke v. Barr Laboratories, Inc.(W.D. Wash. June 22, 2006), aff’d, (9th Cir. 2009), but see Craft v. Demeyer Furniture, Inc. (D. Idaho Feb. 13, 2011) (explicitly disagreeing with this statement and declining to follow Laisure).

Judge Beeler sided with Mr. Yoshimoto denying the motion for summary judgment.  However, as Magistrate Barry M. Kurren explains in Ah Quin v. County of Kauai Department of Transportation (D. Haw. 2010), the Ninth Circuit has ruled on this issue twice in a manner contrary to Judge Beeler:

We'll see what happens with this one.
Posted by Unknown at 10:56 PM