The California Bar Exam is upcoming and so is the question of how well must one do to past.  Different bar review companies offer percentage estimates ranging from 65% to 70%.  I tabulated some statistics from the February California Bar Exam and reached different results.
For the uninitiated, the exam consists of three components over three days.  On the morning of the first and third day, examinees attempt three essay questions and have three hours to complete the task.  These essays very widely in depth and breadth of subject matter, some involve a large number of issues that require cursory treatment, others involve a very specific issue that requires extensive treatment.  On the afternoon of the first and third days examinees attempt the California Performance Test (CPT) which is a three-hour writing assignment.  Each essay is worth 100 points and each CPT is worth 200 points for a total raw score of 1000 points.  That score is scaled.  On the February 2011 exam, the range of possible scores was 40-100 and the average score (by my calculation) was a 60.1.  The total number of points that could be earned was then scaled with the following formula:

The scaling is a bit different but it's essentially:

What's interesting here is that the first few questions correct are worth .8 then every forth or fifth question is worth .9.  As the exam taker gets more questions correct, those answers are more frequently worth more points. 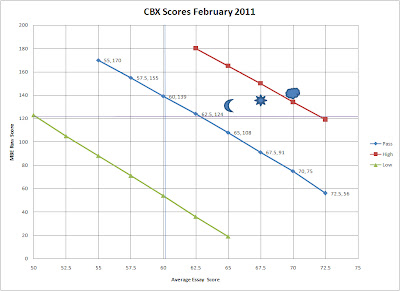 Here is a chart that shows what I am talking about.  The green line represents the 5th percentile of exam takers, the red line represents the 95th percentile of exam takes.  Sure some people did better or worse, but 90% of exam takers fall between those two lines.  The blue line is set of passing scores showing the average raw essay on the x-axis and the average raw MBE on the y-axis.  The objects are various bar exam companies' ideas of what passing scores are.  As you can see, virtually no one obtained a 70% on both the essay and MBE.  The horizontal line is the national average MBE raw score (122), and the vertical line is my guess as to the average essay score (60.1).  So, the average exam taker failed the exam, but not by much.

I wish you all the best of luck.
Posted by Unknown at 6:29 PM