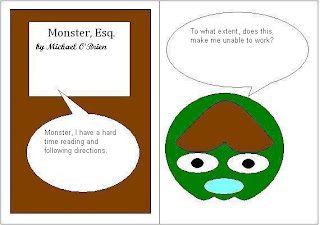 Social insurance is a really interesting aspect of the modern industrial economy.  The government mandates that workers buy insurance, and when the workers become disabled and unable to work, the government provides the workers with a stipend.  This keeps the unemployment rate low, because people who are disabled are forbidden from accepting gainful employment while they receive disability benefits.  This blog has previously explained how social insurance works in the United States.

The federal judge reviews each case to determine if the ALJ's decision is supported by substantial evidence and made with the correct application of the law. In particular, compliance with the procedure in 20 C.F.R. § 404.1520(a). That procedure involves five steps:

At Step Five, the Commissioner carries the burden of considering the claimant’s RFC, age, education, and work experience and determining whether the claimant can "make an adjustment to other work" that "exists in significant numbers in the national economy."

Among California District Courts, the split cuts toward finding a conflict where a person limited to simple repetitive tasks can perform a job with a reasoning level of 3.

Judge Ryu sided with the majority and found that the ALJ failed to adequately explain the conflict created by the VE disagreeing with the DOT.  She remanded the case back the the Social Security Administration for further proceedings.

Barat v. Astrue involved a plaintiff who was run down by a car at a young age, resulting in on leg being amputated and the other having a metal rod installed in it.  The dispute involves steps four and five above in a manner similar to Adams above.

The vocational examiner believes that Mr. Barat can work as a Cashier 11 because that position accommodates his need to sit and stand for brief periods of time.  However, the DOT states that cashiers is silent on the sit/stand option.  Judge Marilyn Hall Patel cites her own case for the proposition that this is a conflict.


Although the DOT is silent regarding the sit/stand option for the Cashier II position, there can be a conflict, for purposes of SS R00-4p, between VE testimony that a particular position has a sit/stand option and a DOT classification of "light work." Smith v. Astrue, No. C 09-03777, (N.D. Cal. Sept. 16, 2010) (Patel, J.) ("This court holds that because the DOT does not address sit/standoptions, the potential inconsistency between the vocational expert's testimony and DOT warrants further inquiry on remand.").

Like in Smith, Judge Patel remanded the case back to the Social Security Administration for further proceedings.

Harrison v. Astrue is Mercedes Harrison's second attempt at receiving Title II benefits, in a previous hearing the Commissioner and district court found her capable of working.  Ms. Harrison claims that mental impairments prevented her from working under step two of the analysis above.  The ALJ found otherwise and Ms. Harrison appeals claiming that the ALJ had “an affirmative duty to call a medical expert when determiningwhether a potentially disabling impairment established after the date last insured existed at adisabling level prior to that date....”  Judge William H. Alsup did not believe the ALJ had such a duty.


Plaintiff misapplies Armstrong [v. Commissioner of the Social Security Administration (9th Cir. 1998)]. That decision reaffirmed a previous holding that "where a record is ambiguous as to the onset date of disability, the ALJ must call a medical expert to assistin determining the onset date." Armstrong, 160 F.3d at 590. In Armstrong, the ALJ found that the claimant was disabled, but the record was not clear on "when those impairments became disabling." Ibid. Here, by contrast, there was no finding that plaintiff had a severe mental impairment at all, at any time. Because the ALJ did not find that plaintiff had a severe mental impairment, the ALJ did not reach the question of onset. Put differently, there was no mental disability, so there was no onset date to determine. The duty to call a medical expert was not triggered.

King v. Astrue involves a claimant who seeks a disability determination based on her mental impairments.  She claims that the ALJ should not have relied on the vocational examiner (VE) because his expert testimony was inappropriate.  I call this a Davis objection because Chief Judge MacBride's opinion in Davis v. Mathews, (E.D. Cal. 1978) accord Mason v. Apfel (N.D. Cal. 2000) (Alsup, J.) and Ischay v. Barnhart,(C.D. Cal. 2005) really set the ball rolling on this issue.  Chief MacBride stated that a whether a VE was an expert was a question of law the courts reviewed de novo and the expert needed to have, "current and extensive experience and up-to-date knowledge." In Davis, the doctor had been out of vocational psychology for nearly three decades and placed mental hospital patients in menial jobs at a rate of ten per year which was not substantial.  According to Magistrate Maria Elena James,

McCarty v. Astrue is a Title II/XVI case which has been remanded back to the Commissioner twice and is now before Judge Marilyn Hall Patel.  Judge Patel had previously remanded the entire case back to the agency for a determination of some missing facts.  The ALJ granted a portion of the claims and dismissed some others.  Now, Ms. McCarty argues that the ALJ lacked the authority to dismiss any of the claims because Judge Patel's order required the ALJ to reexamine all of the claims.  Judge Patel, seemed skeptical:


The ALJ's dismissal here complied with the all the above requirements. McCarty, through his attorney, withdrew his request for a hearing on the record at the hearing, and the ALJ made sure that McCarty was aware of the consequences of the withdrawal. The withdrawal did not follow a sentence six remand, and the ALJ explained that dismissal was reasonable given the possibility that the new hearing would yield a less favorable result than the prior final decision.

She granted summary judgment for the Commissioner.
Posted by Unknown at 12:22 AM