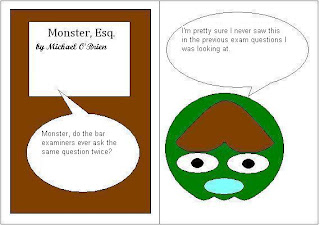 This is the second post in my series on the July 2011 California Bar Exam.  If you think that my answers are terrible, let me hear it in the comments.

Question one primarily tests the inchoate crimes and your ability to apply them. I would rate this as a fastball question, there are a lot of issues and, if you know the rules, you are in good shape. Robbery runs are common on other state’s bar exams but it has been about 20 years since this came up in California.

Vicky operates a successful retail computer sales business out of the garage of her house. Vicky told Dan that she intended to go on vacation some days later. Dan subsequently informed Eric of Vicky’s intended vacation and of his plan to take all of her computers while she was away. Eric told Dan that he wanted nothing to do with taking the computers, but that Dan could borrow his pickup truck if Dan needed it to carry the computers away.

While Vicky was scheduled to be away on vacation, Dan borrowed Eric’s pickup truck. Late that night, Dan drove the truck over to Vicky’s house. When he arrived, he went into the garage by pushing a partially open side door all the way open. Vicky, who had returned home early from her vacation, was awakened by noise in her garage, opened the door connecting the garage to the house, and stepped into the garage. When she saw Dan loading computers into the back of the truck, she stepped between Dan and the truck and yelled, “Stop, thief!”

Dan pushed Vicky out of the way, ran to the truck, and drove off. He immediately went to Fred’s house where he told Fred what had happened. In exchange for two of the computers, Fred allowed Dan to hide the truck behind Fred’s house.

What crimes, if any, have Dan, Eric, and/or Fred committed? Discuss.


I would start this question off by breaking the question up by defendant (Dan, Eric and Fred) and from there chronologically based on crime.

The issue is whether Dan solicited Eric to assist him in robbing Vicky. Common law solicitation is a misdemeanor where the defendant counsels, incites or induces another to commit or join in the commission of any offense. Modern statutes have limited solicitation liability to felonies. Here, Dan told Eric “of his plan to take all of [Vicky’s] computers while she was away.” The state can argue that this statement incited Eric to allow Dan to use his truck. Dan can respond that Eric stated “he wanted nothing to do with taking the computers….” However, solicitation is based only on the defendant’s act and not the third party’s response to the act.

The issue is whether Eric entered into a conspiracy with Dan to steal Vicky’s computers. Conspiracy is an agreement between two or more persons to do an unlawful act or to do a lawful act in an unlawful manner. Here, the state can argue that Dan and Eric agreed to rob Vicky and that Eric manifested his assent by allowing Dan to use his truck. Dan can respond that Eric stated “he wanted nothing to do with taking the computers….” However, conspiracies can be proven by circumstantial evidence. The State will be able to show that even though Eric stated he did not want to be involved in criminal activity, his actions indicated otherwise.

Dan’s next defense is that Eric merely had knowledge of pending or past illegal activity which, when coupled with a lawful action (such as letting a friend borrow a truck) is insufficient to prove an agreement to do an unlawful act. [This is a Lauria defense]. Where direct evidence of intent to participate in a criminal act is lacking, intent may be inferred from 1) a stake in the venture 2) no legitimate use for the goods or service or 3) an unusual volume of business not proportionate to any legitimate demand. Here, Eric had no stake in the venture because he would not profit from Dan’s wrongdoing. Similarly, Dan could have legitimately used the truck and simply chose to use it for theft. Finally, it is unclear about Eric’s truck-lending habits, but a single incident without more does not show a pattern of conduct.

Since the discussion between Dan and Eric fails to show a sufficient agreement between the parties no conspiracy exists.

The issue is whether Dan committed larceny upon Vicky.  Larceny is a trespassory taking of the property of another with the intent to permanently deprive the owner of that property.  Here, Dan took Vicky's property by lifting the computers and beginning to carry them away.  Dan's intent to permanently deprive is manifested by his unambiguous statement to Eric to that affect -  since Dan told Eric “of his plan to take all of [Vicky’s] computers while she was away.”

The issue is whether Dan burglarized Vicky. Common law burglary is breaking and entering of the dwelling house of another at night with the intent to commit a felony or larceny therein. Modern burglary eliminates the dwelling house and night elements. Here, Dan broke into the structure by partially opining Vicky’s garage door and entered into the structure when he “went into the garage….” His intent to commit larceny is manifested by his unambiguous statement to Eric to that affect -  since Dan told Eric “of his plan to take all of [Vicky’s] computers while she was away.” Even if the common law definition applies, Dan entered Vicky’s garage, “[l]ate that night.” Dan can raise the defense that the garage is not a “dwelling house” under the common law. Even if that were true, no jurisdiction applies that restriction to modern burglary statutes.
Dan has committed burglary.

The issue is whether Dan battered Vicky. Battery is an intentional act that results in an unwanted touching. Here, “Dan pushed Vicky out of the way.” He acted intentionally and Vicky did not appear to want to be pushed out of the way.

The issue is whether Dan assaulted Vicky. Common law assault has two definitions: 1) attempted battery and 2) an intentional act which puts one in fear of an unwanted touching. Anyone who completes a crime is also guilty of attempting that crime, therefore since Dan committed battery he is also committed assault (though they may merge for the purpose of sentencing). Under the majority rule, Dan had to walk in the direction of Vicky before he reached his car since she was standing in the garage door, Vicky must have seen Dan push her and therefore the apprehension of touching and the touching itself are separate acts. Under this view, Dan has committed battery and can be sentenced for both assault and battery.

The issue is whether Dan robbed Vicky.  Robbery is larceny (as defined above) plus taking the property from the person or presence of the victim by  force intimidation, threat or violence. Here, the larceny aspect is satisfied as noted above.  The State will argue that Dan was in Vicky's presence because he stole the computers from her garage which was a place under her control and therefore  in her presence.  Dan can respond that Vicky had no control over the place because she was not able to close the garage door from her vantage point.  The state will argue that pushing Vicky out of the way is sufficient 'violence' to complete Robbery and Dan is unlikely to contest that since he has no defense to battery a noted above.

The State has the better argument and Dan has committed robbery.

The issue is what crimes can Dan be convicted of in light of the merger doctrine.  Under Blockburger, a person cannot be convicted of both a crime and a lesser included offense.  The merger doctrine does not apply to inchoate crimes except attempt.  A lesser included offense contains all of the elements of the greater crime.  At common law, assault, battery and larceny were misdemeanors, while robbery and burglary were felonies.

Here, robbery contains all of the elements of larceny, assault and battery, therefore larceny, assault and battery would merge into robbery.  However, burglary requires breaking and entering which robbery does not and robbery requires use of force which burglary does not, so those crimes do not merge.  Even though only one transaction occurred, Dan can still be found guilty of both robbery and burglary.

I. Conspiracy with Dan

There is no conspiracy with Dan for the reasons stated above.

The issue is whether Eric has committed burglary. Burglary is defined above. At common law, an accessory before the fact is a person who is absent at the time of the crime but who procured, incited, advised, counseled or encouraged the principal to commit the crime. Under modern laws, anyone who aids or abets a principal is liable for the principal’s crime. Here, Eric allowed Dan to use his truck, knowing that it would aid Dan in committing burglary.

I. Conspiracy with Dan

There is no conspiracy with Dan for the reasons stated above.

III. Accessory after the fact / obstruction of justice / misprision of a felony

The issue is whether Fred is an accessory after the fact to Dan’s burglary. At common law, misprision of a felony was a failure to report a felony knowing one had occurred. At common law, an accessory after the fact was a person who, knowing that a felony has been committed, aided assisted, comforted or received the felon. Under modern statutes, misprision no longer exists in most states and accessory after the fact is now called obstruction of justice, though the elements remain the same. Here, Fred knew that Dan stole the computers because Dan “told Fred what had happened.” Dan aided Fred by agreeing to store the computers and did not report Fred to the police.

Dan can argue that Fred had stolen the computers, assaulted and battered Vicky but not that he had committed burglary. If this is true all of Dan’s crimes disclosed to Fred are common law misdemeanors to which no liability for accessory after the fact / obstruction of justice / misprision of a felony can lie. However, Dan likely told Fred the truth, that he had committed burglary, a felony and Fred’s assistance is sufficient for accomplice liability.

Fred is an accessory after the fact to Dan’s burglary.
Posted by Unknown at 8:54 PM