July 2011 California Bar Exam Question 2: I saw this before 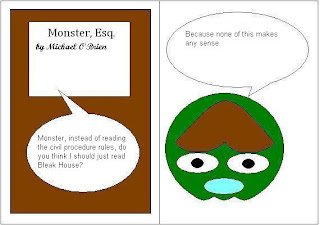 This is the third post in my series on the July 2011 California Bar Exam.  If you think that my answers are terrible, let me hear it in the comments.

Question two is a pretty representative Civil Procedure question. All of these issues have been tested in the past ten years.  I score this as a curveball since you had to understand the rationale for part one to answer part three.

Doctor performed surgery on Perry’s spine to insert a metal rod designed by Bolton, Inc. (Bolton). Shortly after the surgery, Perry developed severe back pain at the location where the rod was inserted. Within the applicable statute of limitations for a tort action for negligence, Perry sued Doctor in federal district court, alleging that she was negligent in using Bolton’s rod for the kind of back condition from which he suffered. Personal jurisdiction, subject matter jurisdiction, and venue were proper.

During a deposition, Perry’s attorney asked Doctor to state whether she had performed any other spine surgeries using Bolton’s rods and, if so, whether any of those surgeries had resulted in complications. Doctor’s attorney objected to the questions on the ground that the information requested had nothing to do with whether Doctor was negligent as to Perry, and Doctor refused to answer. After the attorneys properly met and conferred concerning Doctor’s refusal, Perry’s attorney filed a motion to compel Doctor to answer the questions.

Shortly after the statute of limitations had run, Perry learned through a newspaper article that Bolton had been sued by several patients who alleged that they suffered severe back pain after Bolton’s rod was inserted into their spines during surgery. Perry immediately sought and obtained leave to amend his federal complaint to join and include a claim against Bolton, alleging that it had negligently designed the rod. Bolton immediately filed a motion to dismiss Perry’s claim against it on the ground that the statute of limitations had already run.

Perry also learned that Doctor had lost a lawsuit brought by another patient with a back condition like his who had also alleged negligence by Doctor for inserting Bolton’s rod into his spine. Perry filed a motion for summary judgment against Doctor on the basis of preclusion.

I will discuss after the jump

The issue is whether the court should grant Perry’s motion to compel. All material is discoverable that is either related to a claim or defense in the present action or may lead to discoverable information in the present action unless a privilege applies. A motion to compel discovery requires a party to disclose information the moving party is allowed to receive under the discovery rules. Fed. R. Civ. P. 30(d)(1) prohibits any person from instructing a deponent not to answer a question except when necessary to preserve a privilege, comply with a court order, or to permit a motion to limit the inquiry.

Here, information about previous lawsuits may indicate that Doctor had knowledge that the metal rod was defective. If so, this relates to whether Doctor breached a duty of care to Perry or could lead to discoverable information to that effect. Since the material is discoverable, the motion to compel should be granted.

Alternately, Doctor’s attorney may argue that information about previous lawsuits is privileged and therefore not subject to disclosure under Rule 30. Even if this is true, it is Doctor’s attorney who bears the burden of filing a motion for a protective order stating why, under Rule 30(d)(1), the information should not be released. The attorney’s failure to do so is a violation of that rule, for which sanctions may attach.

The Court should grant the motion to compel.

The issue is whether Bolton can dismiss Perry’s complaint. A motion to dismiss challenges the legal sufficiency of a complaint and will be granted when the complaint states no injury for which the law provides relief. Generally, the date of an amended pleading will “relate back” to the date of the original pleading if the amended pleading arises out of the same nucleus of operative fact as the original pleading. [According to Friedenthal’s treatise,] there is a split in authority on whether a products liability claim arises under the same nucleus of operative fact as a medical negligence claim. The majority rule is that the medical negligence includes the use of defective product and therefore the incident arises from same nucleus of operative fact for which the amended complaint should relate back to the original complaint. The minority view is that the defendants and causes of action are different and therefore it is a separate claim altogether.

Bolton will argue that the court should adopt the minority position that the complaint should not relate back to the original filing because the claims and defendants are different creating a separate cause of action altogether. Perry can point to the majority view that Doctor’s negligence (if any) could have included the use of a defective product, once the source of negligence was discovered the claim amendment is proper. Bolton can respond that Perry knew (or easily could have determined) Bolton’s metal rod was in his back from the onset of the injury, whether it was negligence or products liability, Bolton should have been brought into the case much earlier.

The Court will follow the majority position, and deny the motion to dismiss.

The issue is whether Perry should receive summary judgment as to Doctor. Summary judgment is appropriate where 1) there is no genuine issue of material fact and 2) the moving party is entitled to judgment as a matter of law. Claim preclusion prohibits a plaintiff from litigating a claim against a defendant party where 1) the two parties were subject to a prior litigation 2) that resulted in a final judgment on the merits 3) which is related to a claim in the present litigation. Issue preclusion prohibits a party from re-litigating an issue lost in a precious case where the issue 1) is identical in both actions 2) was litigated and decided in the prior action and 3) the issue was necessary for the court’s judgment.

Here, Perry is the plaintiff and was not a party to the prior action. Therefore cannot utilize claim preclusion.
With regard to issue preclusion, the issue in the previous case is whether Doctor was negligent in inserting the rod into the plaintiffs back. It is unclear whether the rod was inserted in a negligent manner or Doctor was negligent because he inserted a defective rod. If the former situation exists, then the issue is sufficiently different to avoid preclusion in the present case. The issue was litigated and decided in the previous action and was a cause of the Court’s decision satisfying the other elements. Doctor may argue that medical negligence cases are extremely fact specific and that the factual scenario of the previous case does relate to a new case with a new patient. Here, Perry can respond that Doctor wrongfully chose not to answer questions about previous cases in his deposition and he should now be forbidden from introducing evidence of differences in the present case as a sanction.

Without evidence of those differences in the record, there is no genuine issue of material fact and the issue preclusion would give Perry partial summary judgment as a matter of law as to the issue of negligence. The issue of damages cannot be resolved from previous cases because the Perry has presented no evidence that his injuries are similar to the other plaintiff’s and he has failed to show an absence of a material fact in this regard. Summary judgment on this issue should be denied and set for trial.

The court will grant the motion for summary judgment in part and deny it in part.
Posted by Unknown at 9:22 PM