July 2011 California Bar Exam Question 4: Your friends are my friends? 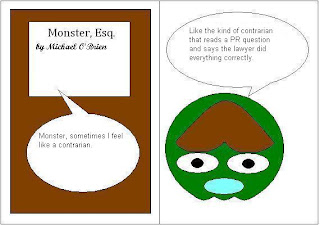 This is the fifth post in my series on the July 2011 California Bar Exam.  If you think that my answers are terrible, let me hear it in the comments.

Question four is a professional responsibility question with an interesting twist... I don't think the first lawyer did anything wrong (of course if you recognized the same issues and came to a different conclusion you were probably fine).  I score this question a screwball. The whole question turns on what Austin specifically does for the medical association and what the association really does with its “recommendations” neither of which is particularly clear, so I made something up.


Austin had been a practicing physician before he became a lawyer. Although he no longer practices medicine, he serves on a local medical association committee that works to further the rights of physicians to be compensated fairly by health insurance providers. The committee develops recommendations, but its members do not personally engage in public advocacy. Austin is a close friend of several of the other physicians on the committee, though as a lawyer he has never represented any of them.

In his law practice, Austin represents BHC Company, a health insurance provider. BHC has been sued in a class action by hundreds of physicians, including some of Austin’s friends, for unreasonable delay, and denial and reduction of reimbursements for medical services. Austin initially advised BHC that he was not confident it had a defense to the lawsuit. After further research, however, Austin discovered that a stated policy of the health care law is the containment of health care costs. He advised BHC that he could plausibly argue that reimbursements to physicians may legally be limited to avoid a dramatic increase in the health insurance premiums of patients. He explained that he would argue for a modification of existing decisional law to allow such a result based on public policy.

When Bertha, counsel for the class of physicians, heard the defense Austin planned to assert in the lawsuit, she wrote him a letter stating that if he presented that defense she would report him to the state bar for engaging in a conflict of interest.

Answer according to California law and ABA authorities.

I will answer below the jump.

The issue is whether Austin’s friendship with a group of plaintiff physicians or his service on the local medical association committee. Under the Model Rules of Professional Conduct (MR) and the California Rules and relevant statutes (CR), a conflict of interest exists where a lawyer’s representation of a client is materially limited by the lawyer’s responsibilities to a third party or by a personal interest of the lawyer.

Here, Austin serves on a local medical association committee which “develops recommendations” to whom is unclear, but not to policymakers. It is likely that the committee contains a set of physicians and a set of health insurance providers who have somewhat adverse goals, but who desire to find a way to work together in order for the physicians to be “fairly compensated.” Austin “serves” on the committee but he is not a director or board member of the association and does not have a fiduciary duty to the association. Under MR, having professional and service interests that clash does not rise to the level of a conflict of interest. Accordingly, he has no conflict between his representation of BHC and his service on the committee, because there is no conflict of loyalties.  Under CR, the conflict standard is higher, the lawyer must disclose business and professional contracts that will be adversely affected by the representation.  The physicians are "good friends" but it is not clear if Austin has a professional relationship with them making "recommendations" to an undisclosed source without a business motive seems unlikely to arise to this level.  If it does, Austin must disclose this interest and risks violating CR if he does not.

Next, named plaintiffs of a class action are not considered clients of an attorney for the purpose of conflict of interest rules. Similarly, they would not be considered opponents for conflict of interest rules. Therefore Austin representing a company against a class of plaintiffs that include his friends does not create a direct conflict. If Austin feels that his personal relationship with his friends impairs his ability to represent BHC he has a duty to disclose that and remove himself (but not his firm) from the litigation. However, this does not appear to be the case, Austin zealously searched for a way to argue for BHC notwithstanding his friends’ stake in the litigation.

The issue is whether Austin’s arguing about “public policy” satisfies his obligation of candor to the court and his obligation to avoid raising frivolous claims. Here, Austin has given BHC a candid view of their case and updated his view upon completing more legal research. This is acceptable since attorneys may argue for a change in policy as long as adverse precedent is disclosed.

Under MR lawyers have an obligation to report attorneys to the state bar for violations of the MR. Under CR lawyers must self-report violations if they are serious. However, this cannot be used as a form of blackmail to argue the underlying claims or defenses in a case. By using the MR or CR to blackmail Austin Bertha has breached her duty as an officer to the court to ensure proceedings are fair.

Bertha has committed an ethical violation.
Posted by Unknown at 9:42 PM